Accra based Springfield on a Historic Deep-water Journey 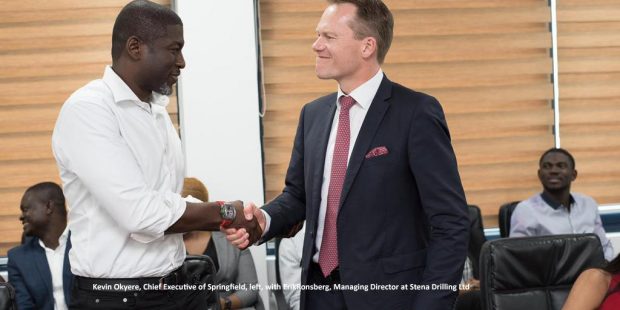 In a matter of weeks, Springfield E&P will be the first home-grown, African owned E&P operator to spud a well in a new deepwater licence.

Its planned drilling of Oak-1, for which it had contracted the Stena Forth drillship, is significant history making.

The 11 year old company plans to follow up the well with another, the Afina-1, both of them in West Cape Three Points (WCTP) Block 2, offshore Ghana.

By all accounts Springfield will be drilling the wells as a full blown operator.

Both prospects are to be tested on the basis of interpretation of an 800 sq kilometre, three dimensional (3D) seismic data, acquired by PGS and paid for by Springfield, in 2017.

It will not be the first time that a company owned by African businessmen would drill, or be part of drilling, in deepwater, but there’s a context.

“Other African owned E&P companies with licences in Ghana, including Amni, Oranto, Brittania U and Sahara, were all awarded their different blocks in the country before Springfield.”

The Nigerian founded Erin Energy, now in bankruptcy, was drilling wells in over 400 metres of water offshore western Niger Delta. It was running a 40,000BOPD Floating Production Storage Offshore (FPSO) facility, the Armada Perdana, until it stopped being a going concern in mid-2018. Its licence to OML 120 was revoked by the government in June 2019.

London listed Afren discovered the Ogo field in 2013, said to be one of the largest discoveries in the world in that year, with, in part, funding raised by LEKOIL, the AIM listed firm founded by a Nigerian entrepreneur.

But Erin Energy (formerly Allied Energy, a subsidiary of Camac, and listed in NYSE Amex), was an operator by default; it came from being a non-operating partner to Statoil, which discovered the asset, Oyo field, in 1995, and ENI, which put it on stream in 2010 and was producing it until it pulled out of that asset. At no time from discovery to commissioning was Erin in operational charge of Oyo field.

LEKOIL, meanwhile, was, on Ogo discovery, also a non-operating partner to Afren, a company founded by a diverse mix of nationalities and which also has ceased to exist.

Springfield was awarded the WCTP Block 2 in 2016, with Ghana National Petroleum Corporation (GNPC) and its operating subsidiary, GNPC Explorco, as carried partners.

Other African owned E&P companies with licences in Ghana include Amni, Oranto, Brittania U and Sahara. They were all awarded their different blocks in the country before Springfield but have not announced any concrete drilling plans.