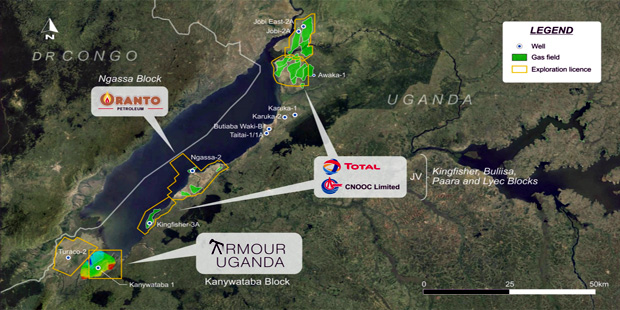 Completion of that 2D seismic survey was part of the Minimum Work Program to be completed by the Company by 13 September 2019, pursuant to the Production Sharing Agreement for Petroleum Exploration, Development and Production in the Republic of Uganda By and Between The Government of the Republic of Uganda and Armour Energy Ltd for Kanywataba Contract Area dated 14 September 2017.

The Company wrote to the Minister in mid- October 2019, declaring that it was suspending work on the 2D seismic survey as a result of an event of Force Majeure (as defined under the PSA). Armour stated that recent severe storms and flood in the Kanywataba Contract Area, have made it practically impossible for vehicles to traverse many of the access roads in the Contract Area, so that the Company’s contractor cannot complete the line clearing, surveying or drilling activities necessary to complete the 2D seismic survey.

Armour says that as at the date of this announcement, approximately 89% of the land clearing (being 96.06 km) and 86% of the surveying (being 93 km) necessary to carry out the 2D seismic survey has been completed. Also, 810 boreholes (into which the seismic charges are to be placed), or 37.5% of the total, have been drilled.

“Given the amount of work that was completed before work was suspended, the Company anticipates that it should be able to complete the 2D seismic survey relatively quickly once it resumes work”, Armour explains. The company says it is “advised that water levels will likely have sufficiently subsided by early 2020, to allow work to recommence”.