Is Namibia Stuck in the “Hoping” Mode? 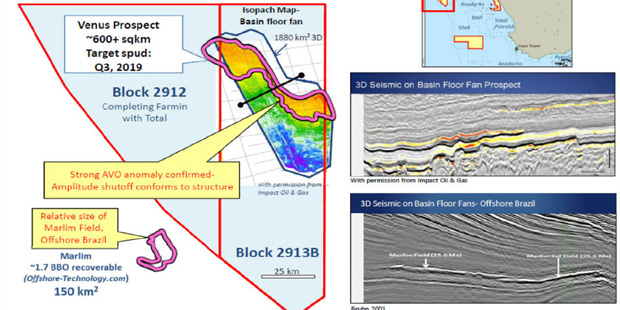 In the frontier, the world waits for a big find…In the proven, the Kudu field looks forward to bankability..

Namibia is in that space again.

Between a wave of exploratory drilling activity and the preparatory stages to the next big probe.

Drilling is the “rock star” event of the exploratory work programme in the oil industry. Seismic acquisition, processing and interpretation are all crucial, as are other cross disciplinary geoscience work that preface drilling. They determine the success of a well, but they don’t show up as headline stories.

Which is why, after two highly anticipated wells turned out disappointing in late 2018, the focus has been not so much on the post well interpretation of these probes, or the basin analysis studies actively going on in the country, but on the wells that have been announced for 2020-2021 drilling.

Neither Tullow Oil, who encountered non-commercial hydrocarbons at its Cormorant-1 exploration well in the Petroleum Exploration Licence (PEL)-37, nor Chariot Oil& Gas, who reported finding water-bearing reservoirs in the exact place it was expecting oil in Prospect S, in PEL 71, is looking forward to any drilling in the next two years.

But everyone is anticipating TOTAL’s planned Venus-1 well, in ultra-deep offshore Block 2912.

Claims that Venus might emerge the largest discovery on the continent in the last 10 years are “supported” by a widely publicised seismic profile showing an extensive basin floor fan and a mapped surface indicating an Amplitude Versus Offset (AVO) supported direct hydrocarbon indicator (DHI), said to be similar to Brazil’s Marlin discovery. The problem with the Marlin comparison is that Namibia is not exactly conjugate with Brazil the way Angola is and the Angolan “mirrors” of Brazilian plays that have been drilled so far have been dusters.

Unlike most African countries without a single molecule of hydrocarbon in production, Namibia somehow keeps in the news, and manages to have hosted the big oil majors all through the last 45 years.

ExxonMobil signed agreements to extend its footprint in the country last April. It inked deals with the government and the National Petroleum 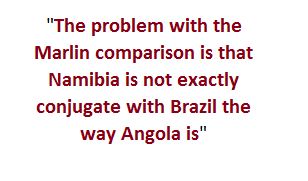 One key new entrant to watch is Kosmos Energy, the American junior with a record of wildcat exploration successes in Africa in the last 12 years. In October 2018, Kosmos entered into a strategic exploration alliance with Shell to jointly explore in Southern West Africa, with initial focus on Namibia, where Kosmos has acquired interest in Shell-operated block PEL 39. As part of the alliance, the two companies will also jointly evaluate opportunities in adjacent geographies. The block covers an area of approximately 12,000 square kilometres in water depths ranging from 250 to 3,000 meters. In January 2019, Kosmos completed a 3D seismic survey covering approximately 6,000 square kilometres. Processing of this data is currently underway. The company is compiling an inventory of prospects on the license while integrating the new three dimensional (3D) seismic data in its geological evaluation during 2019. It hopes it may drill a well as early as 2020.

The Kudu Gas to Power project has at least 18 months to go before all the pieces can come together to make it the sort of bankable proposal that gets the Final Investment Decision.

The project, in the current iteration, is to valourise the 1Trillion standard cubic feet Kudu gas field, and use some of the gas to generate electricity from a 475 MW plant. BW Offshore concluded its farm into the Kudu field acreage in February 2017, taking a 56% stake with the state hydrocarbon company NAMCOR holding a 44% stake in the upstream and midstream segments of the project. The state power utility Nampower, with its partners, will install the power plant, offtake the gas and convert it to electricity. But neither state owned enterprise has been able to get hold of their share of financing the project,

NAMCOR was hoping that BW Offshore would carry it by paying its 44%, after the ministerial consent had been granted. But that has not happened. NAMCOR is now willing to fund 10% and find willing investors for the remaining 34%. Downstream, the NamPower is challenged in raising finance for its 51% share of the power generation side of the project.

The invoice for the Kudu Power Station is about $749Million of which 75% would be raised as debt (limited recourse). The gas field development is expected to cost $1.15illion (70:30 debt/equity), So the entire funding to get the project started is slightly less than $2Billion.

“Coordinating three integrated projects with a combined cost in excess of $1.9 Billion does not happen over-night!”, says Immanuel Mulunga, NAMOCOR’s Chief Executive Officer. “Namibia’s GDP is around $13Billion and it has taken several years to get the Kudu project to the point where all the technical/commercial hurdles have been overcome”.

Although the argument has been that the less money from the treasury goes into the project the better, in order not to burden the tax payer, the fact is that project sponsors need assurance from Government that the electricity bought by public institutions will be paid for. There have also been calls for modification of the single buyer model for the project, which would have seen all the electricity produced sold to NamPower, to a multi-buyer model, including a private energy supply concept that would most likely see Kudu Gas also supply electricity directly to private buyers.

In any case, for now, Kudu Gas To Power isn’t yet at a stage that a Final Investment Decision can happen.