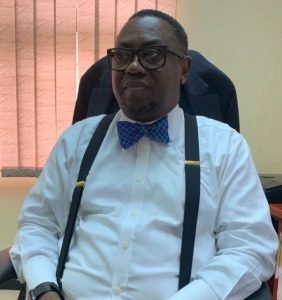 TGS-PetroData is to commence a regional Multi beam and Seafloor Sampling (MB&SS) Programme, covering 80,000 square kilometres of both allocated and non-allocated blocks from offshore to deep offshore Niger-Delta, in December 2019.

The new survey will capture 200 core locations and provide crucial de-risking of the petroleum system, “to help better inform exploration and appraisal decision making”, says Wole Shebioba, Chief Executive Officer of PetroData, who serves as Director of administration for the project.

PetroData, originally a data warehouse company, went into partnership, six years ago, with TGS, the Norwegian player and global specialist in multi client data acquisition and marketing. The resulting incorporated Joint Venture, TGS-PetroData Services Ltd, received the approval of the Department of Petroleum Resources, the Nigerian regulatory agency, to conduct the programme.

There is a further plan to acquire two dimensional (2D) regional well tie data; that is tying most of the deep water wells in Nigeria with 2D seismic lines. And there is also a regional reprocessing project.

“We have extensive 2D seismic data which was acquired between 1998/1999 by Veritas. We have almost completed the reprocessing of the data” Shebioba explains..

“With these three packages, I believe that we are ready for the proposed licensing round by the government”, Shebioba anticipates. “When it takes place, there is going to be at least new data for investors to see. But of course, you know that we are doing all these in partnership with the DPR”.

TGS-PetroData had a roadshow around Nigeria with the reprocessed data on projects NG02 survey  and NGRE19 survey. It presented it to the companies it thinks might be interested, especially the five majors who operate in Nigeria (ExxonMobil, TOTAL, Shell, Chevron, ENI (Agip) “and to a large extent, they were happy with what they’ve seen”, Shebioba says.

“The whole idea data is for de-risking a prospect and so, the more data you have the more confident you are about where you want to drill and the likelihood of getting oil. So companies and the people that understand the business of exploration have all kinds of data, as much as you can get”. 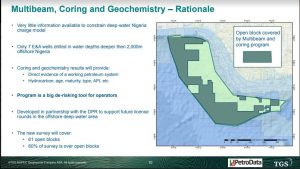 There’s nothing like too much data, argues Shebioba, himself a trained geophysicist of 33 years post-graduation experience, who spent his first 11 years working for Shell. ”When a data you have here is saying this and another you have is not consistent with that, you would have another one that would tell you to confirm what the first one is saying.

« Ghana’s Springfield makes a Discovery in Deepwater
The Bullfrog Was an Unusual Probe, TOTAL Explains »