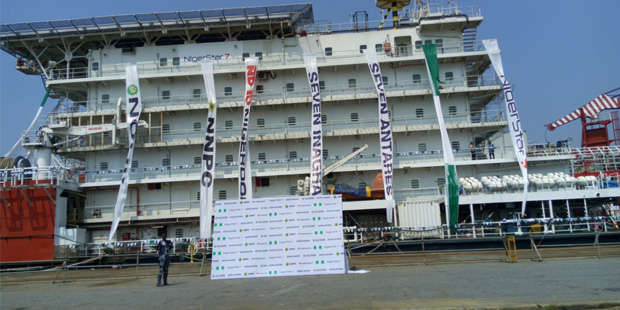 The ceremony took place at its flagship yard NigerDock on a week day of the last week in November 2019.

The SEVEN Antares, named after a star, precisely the fifteenth brightest star in the night sky, is a pipelay vessel running 119metres in length and 32metres in width. It can work in water draughts from 5metres to hundred metres depth, serviceable for shallow and deep water environments.  A 120tonne S-Lay capacity vessel that can lay pipes from 4-60 inches in diameter, boasting a 300 tonne crane situated aft the vessel. Built to accommodate 330 persons on board, the vessel has a clear deck area of 1,370square metres. Combined on-board generated power above 3,705 kilowatts installed with Electronic Fuel Monitoring System. A Helideck sits atop the living quarters.

The SEVEN Inagha, named after a fish, is a specially adapted self-propelled and self-elevating jack-up and accommodation barge constructed in 2011.It spans 83.38metres in length and 39.32metres in width with tri-leg length of 97.5metres. It has two 295tonne cranes which can work simultaneously in tandem and it accommodates 150 persons. Its DP-1 like manoeuvrability eliminates the use of tugboats to change positions during work. It is also installed with the Electric Fuel Monitoring System.

Both vessels have been work-tested in Nigerian waters. The SEVEN Antares recently concluded PUPP-Production Uplift Pipeline Project at ExxonMobil’s Idoho field which ran from August 2018, involving pipe-laying from Idoho to the Qua Iboe Terminal (QIT). The SEVEN Inagha, absent at the re-flagging ceremony, was at work carrying out Platform Revamp Project on all Mobil Producing Nigeria (MPN) platforms in Nigeria. Initially billed as a three-year project, timely completion of project under budget saw it being extended to five years.