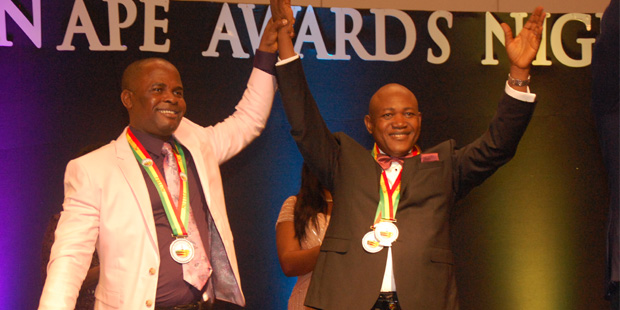 The Nigerian Association of Petroleum Explorationists (NAPE), Africa’s largest body of technical petroleum professionals, has elected Alex Nachi Tarka as its President for the next one year.

The 11,000+ strong group handed over the reins to the state employed Geoscientist at a lush ceremony rounding up its 37th Annual Conference in Lagos.

Tarka, Manager of the divested Shell JV assets at the Nigerian Petroleum Developmemt Company (NPDC), was decorated with the insignia of office by the outgoing President, Ajibola Oyebanji, on a glitzy night of awards that featured the induction of seven ranking members, including Mele Kolo Kyari, Group Managing Director of the NNPC, as distinguished fellows of the association.

The NAPE Presidency is, on the face of it, the most powerful advocacy role in the Nigerian segment of the global oil patch.

On his inauguration, Tarka had very few words: “I am confident that the industry and academia shall feel the positive impact of today’s event”.

NAPE was created in 1975 as the Lagos Society of Geologists and Geophysicists, a professional society to further both social and technical interaction among colleagues. The name later changed to the Nigerian Association of Petroleum Explorationists (NAPE), to accommodate colleagues in other parts of the country. By the mid -1980s, the association had broadened its scope from focus on its members, to advocating for value addition to the Nigerian oil industry. NAPE led the campaign for the country’s venture into deepwater terrain; called for more frequent licencing rounds, pushed the idea of encouraging the indigenous enterprise and championed the concessioning of Marginal Fields. These issues may appear “hot button” now, but they were very niche ideas 30 years ago, when the association started pushing for them.

Nachi Tarka has been part of the technical elite of the oil and gas industry since he served the Nigerian mandatory post graduate Youth Service as Trainee Well-site Geologist (NYSC) at TOTAL Exploration and Production Nigeria (then Elf Nigeria) in 1990.

But his main claim to fame, as a technically honed earth scientist, is the job he did as Deputy Manager in the Frontier Exploration Services Division (October 2017-October 2018).

With the discovery of oil, gas and condensates in Kolmani River-2, a result that Mr. Kyari himself described as “significant”, Tarka should feel proud to have been the one who was asked to give the presentation “Nigerian Frontier Basins-The Journey So Far” at the NAPE Monthly Technical/Business Meeting in Lagos in April 2016. Three years before the well was spud, that paper laid out bare, the comprehensive technical work that NNPC had done to appraise the 1999 discovery made by Shell.

But Tarka, a humble civil servant, would not even comment on his role, let alone take credit.

In the 12 short months he has as President, Mr. Tarka has enormous responsibility. In an increasingly uncertain oil and gas industry, in which the Nigerian government appears desperate to make the environment as unfriendly as it can, the onus is on professional bodies to amplify the advocacy and heighten their engagement with the authorities. The Buhari government is determined to listen only to its own voice and oil companies are struggling with the tools for a reasonable conversation. The poor conversational skills of the Oil Producers’ body, the OPTS, were starkly on display at the legislative hearings for the passage of the Deep Offshore And Inland Basin Production Sharing Bill, which resulted in high spikes to Royalties paid for Deepwater assets.

If the government doesn’t trust Oil Companies, perhaps they will listen to professional bodies?

Beyond the phantasmagoria of his election, Alex Nachi Tarka has a call to make tto his peers at the helm at the Society of Petroleum Engineers (SPE) and the Nigerian Mining and Geosciences Society (NMGS). There is a lot of work to do.

« Tullow Appoints Landsec Man to the Board
Sarki, New DPR Director, Was Not on the Radar »