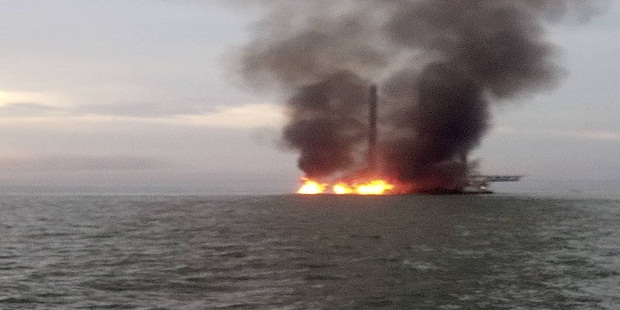 A Hydraulic workover rig Grace-1 HWU, working for the Nigerian independent Guarantee Petroleum, burst into flames over the weekend in the course of re-entry operations on the Ororo-1 well in shallow water Oil Mining Lease (OML) 95.

The incident was the culmination of a well control situation that had been shaping up since mid -April.

Field data indicate that, in late April, technicians had put the well under control after it had released fluid to surface through malfunctioned Blow Out Preventer (BOP) on the rig, owned by Joeny Holdings Limited. “Well is stable and gas leak at the same level as at when BOP was closed-in.  No increase in gas flow”, the report indicated as of April 22, 2020.

But by May 15, the wellhead had caught fire.

“All the personnel had been successfully evacuated off the 300 Series SEWOP (Self Elevating Work-Over Platform)”, reported Guarantee Petroleum, operator of the Ororo field. But the Platform itself had not been moved from the site.

The company had written the Department of Petroleum Resources (DPR), the industry regulatory agency, since April 23rd, requesting for approval to carry out the needed containment of the flow of gas and fluid droplets from the wellhead. Guarantee claims that the regulator did not dignify it with a response.

DPR spokespersons dd not have any comments on the matter.

Guarantee’s licence to Ororo field had been revoked by the Nigerian government, through the DPR, on April 7, 2020, but the company was deep in the middle of the re-entry operations when the letter came.

DPR’s refusal to respond, in the last month, to Guarantee Petroleum’s correspondences, may have to do with the regulator’s consideration that the company no longer had a right to the field. But that itself throws up a question: How can you revoke a licence right in the middle of operations you have yourself approved? See related story.

On May 15, after the fire incident started, Guarantee Petroleum sought DPR’s approval to use dispersants “and other needed materials “around the well and environs “to avoid loss of lives and further pollution of the communities affected”.

It also said it contacted Chevron Nigeria and Halliburton (the American oil service provider) for help. Chevron, an E&P major, is the operator of OML 95, the acreage from which Ororo field was ringfenced.

Esimaje Brikinn, Chevron’s General Manager, Public Affairs  explained to Africa Oil+Gas Report that  “the affected facility is a third-party facility and it is not operated by Chevron Nigeria Limited (CNL) or any of its affiliates”. He added that the company was “prepared to provide necessary emergency response assistance in accordance with petroleum industry emergency response protocol, to help address the situation, if required. CNL remains committed to safety of the people and the environment. CNL will continue working with relevant regulatory agencies and other stakeholders on protection of the environment”.