Aker Will Use Two FPSOs For the Pecan Project in Ghana 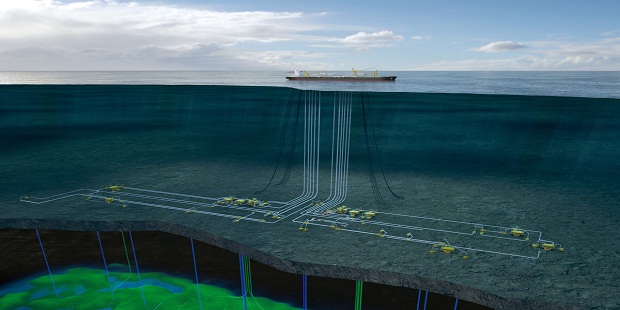 The Norwegian independent, Aker Energy, says it has changed its development concept for the Pecan field in ultra-Deepwater offshore Ghana.

The company will be using two FPSOs to drain the 450Million barrel (probable) reserves.

While the original field development concept was based on a centralised Floating Producing Storage Offshore (FPSO) vessel, supporting the development of the entire Pecan field, as well as tie-ins of all other area resources, the focus has shifted toward a phased development approach.

“This approach will enable Aker Energy to commence with one FPSO for Pecan in the south and expand to a second FPSO in the north after a few years, with tie-ins of additional discovered resources. The first FPSO will be deployed at around 115 kilometres offshore Ghana over a subsea production system installed in ultra-deep waters in depths ranging from 2,400 to 2,700 metres”.. ”, Aker says in a widely distributed release.

There has always been the suggestion of phased development, but Aker never said anything publicly about two FPSOs.

The Pecan field was discovered by Hess Corp. in December 2012. The American independent sold its equity on the asset, along with operatorship, to Aker Energy in 2017. The Norwegian explorer immediately ran with the project, hoping to take the discovery to market by 2022.

Aker concluded an appraisal campaign, involving three wells, in mid-2019 and announced that “reserves, to be developed in the first phase, are estimated at 334Million barrels of oil. Discovered contingent resources, to be developed in subsequent phases, are estimated at 110-210MMBOE, resulting in a combined volume base of approximately 450–550MMBOE. These estimates exclude any additional volumes from Pecan South and Pecan South East, currently being assessed”. Aker further declared it had “identified further upsides in the area that we intend to mature as part of the area development”, adding that “the total resource potential in the area is within the range of 600-1000MMBOE.”

In March, however, the company announced that a final investment decision (FID) had been placed on hold, postponing the project.

Today, it said: “While no new date has been set for the FID, the company is working actively to confirm the feasibility of a phased Pecan field development by executing conceptual studies.

Aker says that the phased development of the Pecan field and the utilisation of a redeployed FPSO vessel will substantially reduce the CAPEX and, hence, reduce the breakeven cost. In addition, it will increase the possibility of reaching a commercially feasible project that will allow for an investment decision. Aker Energy and partners are currently assessing several FPSO candidates for redeployment, and the final selection will be based on technical capabilities and cost.

Aker Energy is the operator of the Deepwater Tano Cape Three Points (DWT/CTP) Petroleum Agreement, with a 50% participating interest in the DWT/CTP Petroleum Agreement. Its partners include the Russian explorer Lukoil (38%), the Ghana National Petroleum Corporation (GNPC) (10%) and the indigenous company Fueltrade Limited (2%).