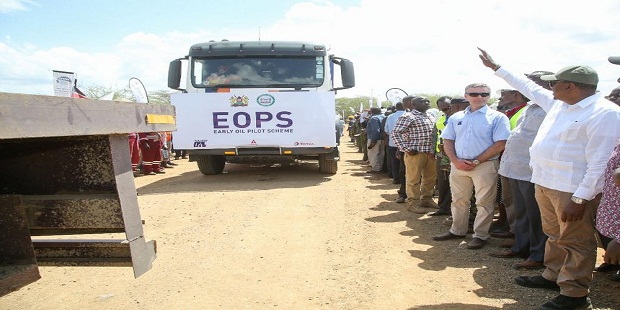 Tullow Oil and its partners have formally ended the Early Oil Pilot Scheme EOPS, in Kenya, describing it as a successful project which provided critical technical data, logistical and operational experience and training.

The scheme featured extraction of up to 2,000Barrels of Oil Per Day and trucking on over more than 1,000 kilometres of road from the Ngamia and Amosi oilfields in the Turkana County, in the country’s north, to a storage depot in Mombasa in the far south.  Export of the commodity from Mombasa began in August 2019, with the value of inaugural shipment of 200,000 barrels, bought by ChemChina UK Ltd, for an estimated $12Million.

Over 100 tankers were used to move 2,000 barrels per day over the 1,000 kilometres, while the scheme lasted

The partners-Tullow, TOTAL and Africa Oil, say that the experience will materially assist the National and County Governments and the Joint Venture Partners on the journey towards Full Field Development (FFD).

“It has allowed Kenya’s oil to be marketed and established on world markets. EOPS has given local entrepreneurs an opportunity to participate in crude oil transportation with key focus on industry-safe practices”, says a statement by Mark MacFarlane, Tullow Oil’s Chief Operating Officer (COO). “Critical local infrastructure, including local roads and the Kainuk bridge, have been significantly improved as part of the scheme”.

In January 2020, Tullow Oil reported it had suspended the transport of crude oil from Turkana to Mombasa due to incessant rains that caused severe damage to roads.

« OPEC+Cut: Nigeria Orders Egina Field Output Reduced by 40%
Aker Will Use Two FPSOs For the Pecan Project in Ghana »