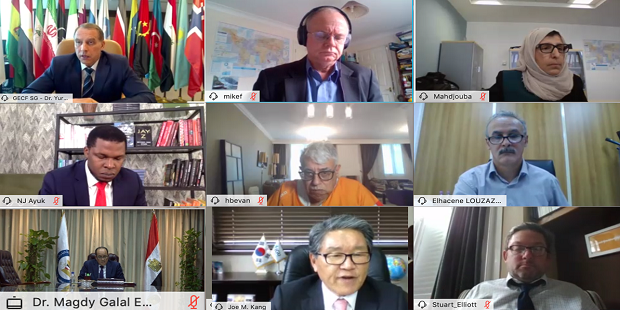 Increased cooperation between producers and buyers, digitalisation across the value-chain, investment in infrastructure and research and development in innovative technologies will play a pivotal role in positioning natural gas as a fuel of choice for the 21st century global economy.
These were some of the key messages of the distinguished line-up of international gas industry leaders and panellists who participated in the 3rd GECF Annual Workshop on Promotion of Natural Gas Demand.

The widely attended workshop, held virtually, was organised by the GECF (Gas Exporting Countries Forum) at a critical time for the gas industry which is facing unprecedented levels of complexity and market upheaval brought on by the COVID-19 pandemic and persistently mild winter. In spite of this, the speakers opined that natural gas is the fuel that can achieve the UN Sustainable Development Goals and the objectives of Paris Agreement as its credentials far outweigh that of other energy sources such as coal and oil.

Welcoming the audience, Yury Sentyurin the GECF Secretary General, outlined the salient points that leverage gas industry’s growth and highlighted the Forum’s efforts in promotion of natural gas, in line with the GECF Statute, the GECF Long-Term Strategy, and the Declaration of Malabo at the conclusion the 5th GECF Summit of Heads of States and Government, all of which guide the GECF to advocate for the versatility of natural gas based on fair pricing policies and a level playing field, amongst other factors.

“We recognise the vital role that natural gas has to play in energy transition and sustainable development as we strive for energy security for all nations. Now more than ever, there must be a spirit of collective collaboration amongst industry players in order to sustain existing markets, and more so to create new promising ones,” said Mr. Sentyurin.

“We also recognise the crucial role of digitalisation as we strive to reduce cost across the natural gas value chain and enhance the competitiveness of natural gas.”

The Secretary General noted that the workshop was instrumental in increasing awareness of natural gas within the framework of global energy security and provided potential strategies to promote natural gas demand, some of which include the crucial role of advocacy for natural gas, government policies that need to encourage natural gas utilisation, cooperation amongst market stakeholders, the role of technological disruptions, importance of robust pricing mechanisms to secure sustainability of supply, investment in infrastructure in consumer countries, and other actions that will be studied further in the GECF Secretariat for future actions.

The session was followed by two immersive panel sessions.

In his intervention, Mr. Kang referred to the messages published in the IGU’s latest report, ‘Gas Technology and Innovation for a Sustainable Future’, and focused his remarks on the potential that technology can offer in reducing greenhouse gas emissions and improving energy access. He also highlighted the urgency of investment decisions to be made if this potential is to be realised.

Mr. Ayuk thanked the GECF for bringing the natural gas agenda to Africa, particularly by hosting the Forum’s Summit in Equatorial Guinea, and thereby in Africa for the first time, in 2019. He also appreciated the GECF’s work in promoting further cooperation with African countries to use gas as the core source of energy in the development programmes and climate change policies, in delivering energy to the continent’s consumers, more broadly in alleviating energy poverty. Mr. Ayuk emphasised the crucial need for development of the gas industry in Africa through investment in infrastructure and industries.

Following this, Dr. Galal pointed out the steps taken by the Egyptian government in stemming the decline in consumption in Egypt due to the COVID-19 impact, which has seen a drop in demand by 13% between January and May 2020 compared to last year. According to him, whilst the government lowered the price of gas in the industrial sector, more incentives needed to be provided by it, especially in the upstream activity by providing flexible terms in the concession agreements. Over the long-term, he said, serious actions should be considered by the gas industry in terms of adapting new strategies to ensure sustainability of the business. This might include significant structural and organisational changes.

Mr. Ibrahim of Petronas pointed out that the rising number of LNG importing countries from merely 15 in 2005 to 39 countries in 2019 shows that LNG is well positioned to prosper as the most significant source of energy in the future. He also highlighted some creative LNG solutions including LNG bunkering, virtual pipeline system, small-scale break-bulking and vertical integration that will create new and niche markets. Furthermore, Mr Ibrahim stated that the value of natural gas should be preserved while creating a level-playing field between producers and consumers.

The GECF Gas Market Analysis Department Head Ms Mahdjouba Belaifa then spoke about the importance of this annual workshop for the industry and the GECF’s role in aligning many voices as one voice. She explained that in the previous two workshops the key identified areas for natural gas were held with a focus on cost competitiveness, policy advocacy, importance of long-term oil indexed contracts for the security of supply, development of infrastructure, and new business models. She highlighted some of the proposed actions after the workshops such as reinforcement of dialogue, role of R&D, fair access to technology, engagement of policymakers in advocacy for fair policies towards natural gas, the role of social media to sensitise various segments of the public, as well as digital technologies to improve productivity.

In the first panel discussion, ‘Improving the competitiveness of natural gas through Cost Optimisation and Digitalisation’, the participants discussed a number of themes affecting the global gas and LNG markets. Moderated by Stuart Elliot, Senior Writer of European Gas & LNG at S&P Global Platts, joining this debate were Robbin Mills, CEO of Qamar Energy and Vincent Demoury, General Delegate of International Group of LNG Importers (GIIGNL).

Mr. Mills focused his views on the Middle East region, where he mentioned that gas demand growth is expected to shift from power to the industrial sector in the long-term due to increasing renewables deployment and improved efficiency. As it relates to a gas surplus in the region, this could bring several opportunities, including new lighter industries, intra-regional export projects (gas, LNG and electricity), enhanced oil recovery, hydrogen production, and expansion of e-vehicles, which will support a growth in electricity demand.

Mr. Demoury held the view that although LNG has been growing at a healthy pace over the last few years it faces several challenges in a post-COVID-19 world, including economic growth, volatility, affordability, and environmental policies. As such, there is a need that producers, consumers, and policymakers work together to develop methodologies and invest in technology for decarbonising the gas industry and innovation to improve its competitiveness and sustainability.

The second panel, ‘Adapting to new gas market realities in a post-COVID-19 situation: Low Prices and Weakened Demand’, was moderated by Nikolay Kozhanov, Research Associate Professor at the Gulf Studies Centre at the Qatar University, and featured the presentations of Mr Ayuk, as well as Sergei Komlev, Head of Contract Structuring and Pricing Directorate from Gazprom Export and Mike Fulwood, Senior Research Fellow at the Oxford Institute for Energy Studies.

Mr. Fulwood maintained that while there are opportunities for growth in gas demand in Sub-Saharan Africa and emerging Asian LNG markets, gas will continue to face competition from coal in Asia. On the other hand, Mr. Sergei drew the audience’s attention to spot prices which he believed tended to overreact to even minor market imbalances while in his opinion oil-indexation provided a more stable gas price.

NJ Ayuk reiterated the issue of lack of infrastructure in Africa, in particular, a deficit in regasification facilities. He signalled out the huge potential of gas monetisation in Africa, where gas industry development will trigger social and economic growth and create jobs.

Throughout the workshop, regular Q&A sessions took place whilst a few real-time polls were also conducted.

The Annual Workshop on Promotion of Natural Gas Demand is a premier industry event and is designed to empower professionals and observers in the field of gas market to gain a deeper understanding of the market conditions, look at the common challenges,  and think collectively on ways to promote natural gas to enhance its prospects as the fuel of choice for sustainable development.

« Ghana’s Gas Master Plan is “Outdated”, Critic Claims, and “No Longer Fit for Purpose”
Where is the Gas Market, in Africa Itself? »