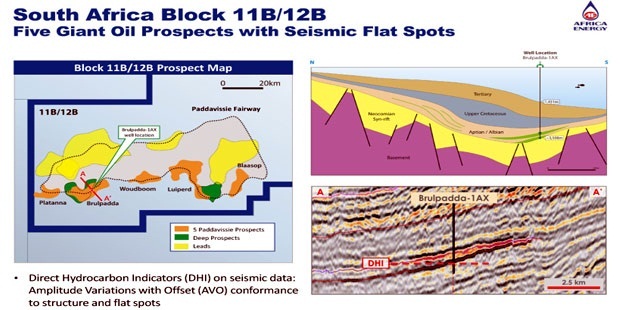 Block 11B/12B is the site of the Paddavissie Fairway, on which TOTAL’s huge gas and condensate discovery was made in February 2019.

TOTAL is returning for a multi-well campaign in the block, located in the rough waters offshore Cape Agulhas, from September 2020.

“Block 11B/12B offshore South Africa contains one of the most exciting oil and gas exploration plays in the world today” Garrett Soden, the Company’s President and CEO, commented.

“In anticipation of the Luiperd-1X well results expected later this year, we have agreed with Impact Oil& Gas and Arostyle to simplify and consolidate Main Street’s 10% interest in Block 11B/12B under Africa Energy,” Soden said.

Luiperd-1, suspected to be the largest prospect in Paddavissie Fairway, will be the first on TOTAL’s drilling schedule. It will be drilled by the semisubmersible rig Deepsea Stavanger, operated by Odfjell Drilling.  Two other wells are expected to follow in short order.

Africa Energy says it is pursuing two transactions by which will first secure the indirect financial interest held by Impact Oil & Gas Limited and then obtain an option from Arostyle Investments (RF) (Proprietary) Limited, which holds 51% of the shares in Main Street, to acquire the entire Participating Interest after drilling the Luiperd-1X well. “Following the Impact Transaction and exercise of the Arostyle Option, subject to various consents and approvals, Africa Energy will directly hold the Participating Interest, and both Impact and Arostyle will be significant shareholders of Africa Energy”.