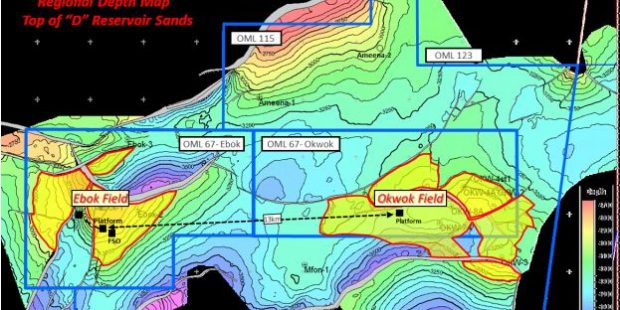 Oriental Energy Resources has commenced a marketing campaign of certain interests in its existing offshore Nigeria assets to qualified prospective partners, having recently obtained Government approval for its legacy block Oil Mining Lease (OML-115) for a new twenty-year term under terms which include a zero-relinquishment provision.

OML-115 includes an oil discovery adjacent to the Okwok Field, and several large potential exploration prospects defined by a block-wide circa $40Million state of the art four-component 3D seismic survey acquired in 2012, the same seismic data set that was used to define Oriental’s recent successful exploration well Ebok-45, that has tapped a significant new pool of light oil in acreage adjacent to OML-115.

Oriental is an indigenous offshore (marginal field) operator and oil producer, and the 100% interest owner of OML-115 and the Ebok Field in OML-67, and the 88% interest owner of the Okwok Field in OML-67.   In Oriental’s nearly 30-year history, it has partnered with Conoco, Nexen, Mobil-NNPC, Addax Petroleum, Energy Equity Resources, and Afren Plc.

Oriental’s recent Ebok-45 Deep Discovery promises to deliver a potential recoverable reserve of a similar or greater scale than both Ebok and Okwok Fields.

“Oriental has been responsible from Day One to maintain all of its licenses in good standing with the Government, to acquire all permits and licenses for the circa $4Billion Ebok Development and its 45 wells drilled to date”, the company says in a note to investors.

The Okwok Field is currently under development with a well-head and FPSO development solution that has its FDP approved and under way to deliver First Oil in mid-2021. From Oriental’s recent organic exploration successes and the conservative reserve potential Oriental anticipates achieving gross production from the combined Ebok and Okwok Fields of circa 50,000BOPD by year-end 2023 and has set a corporate goal of attaining 100,BOPD by year-end 2028.

This article was originally published in the May 2020 edition of Africa Oil+Gas Report.