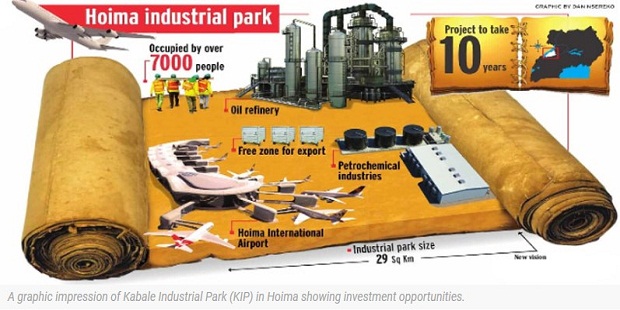 Construction of Uganda’s 60,000Barrels Per Stream Day cannot start until 2025.

The delay comes about as a result of the push of Final Investment Decision on the basin wide upstream oil development project, to 2021 at the earliest.

The refinery project had always been contingent on the certainty of the upstream project.

Even before the announcement that the inability to resolve Tax issues would delay investment decision on Uganda’s large oilfield project, the refinery facility to take advantage of the produced crude had been moved forward.

The upstream project itself involves production of 230,000Barrels of Oil per Day (BOPD) at peak, pumped into a 1,445 kilometre pipeline running from Hoima in Uganda’s west to the Tanzanian port town of Tanga on the coast of the Indian Ocean.

The Joint Venture Partners, TOTAL and CNOOC, had been pressuring the Government of Uganda to commit to channelling all the available crude, once project reaches first oil, to the export pipeline for the first three years, before allocating the refinery share of the crude.

They wanted delay of construction of the government-preferred refinery to 2024.

But now that a global pandemic had imposed its timeline on the main project and pushed it forward by two years, refinery construction cannot start until 2025, at the earliest.

Historically, the Ugandan authorities had preferred to beneficiate as much of the crude as it could take in the country, via a refinery.

This article was initially published in the REFINERY GAS ANNUAL, run in the May, 2020 edition of the monthly Africa Oi+Gas Report.