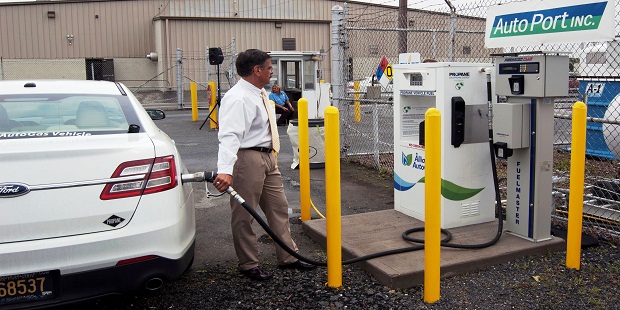 Egypt is facing considerable obstacle to its plan to convert close to Two Million Vehicles into dual fired engines that could be fueled by both gasoline and natural gas in the next three years.

Japanese auto companies Nissan, and Toyota, two key early supporters of the plan, are no longer as enthusiastic as they once were.

The two companies were to convert thousands of minibuses to run on dual fired engines.

Toyota had been far more supportive of the project, which targets 1.8 Million vehicles. Toyota had tentatively agreed it would manufacture 240,000 minibuses running on dual fired engines.

Toyota is now requesting for customs and VAT exemptions from the authorities and the negotiations are dragging out.

Apart from Toyota and Nissan, there are two local distributors of minibuses; Al Amal and Modern Motors. They are still fully engaged with the project.

Ultimately, President Abdel Fatah el-Sisi has said, Vehice licencing will be conditional on cars being equipped with natural gas engines.

Through the initiative, owners of vehicles over 20 years old will receive low interest loans through MSME Development Agency to purchase new dual-fueled vehicle. Owners of newer vehicles can access zero interest finance to outfit them with new engines

In the meantime, Egypt’s Mass Transit Authority (MTA) says it would work with the Military Production Ministry to convert 300 buses to run on natural gas as a first phase, The MTA plans to convert the engines on its entire 3,500-bus fleet within two years.

The national conversion project follows up on a 2009 scheme that sought to replace 70,000 old taxicabs with zero- interest loan new vehicles fitted with dual fuel engines

Although the programme fits into the standard Egyptian government’s effort to utilize natural gas in the country, officials say that this scheme is targeted at ameliorating the cost of living. Whereas a litre of 80-octane gasoline, (the cheapest) fetches $0.39, the same volume of natural gas can be purchased for $0.21, at any of Egypt’s filling stations.