TOTAL in A Second Big Discovery in South Africa 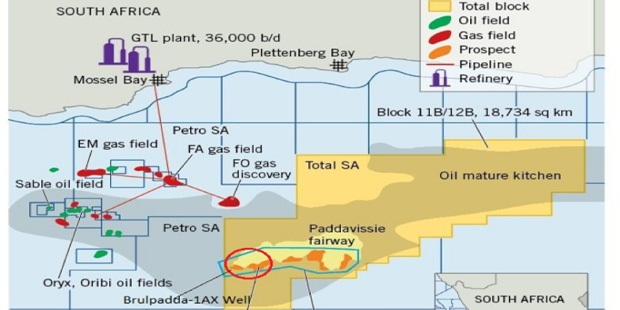 With the second major discovery in less than two years, South Africa is shaping to become a major gas/condensate heartland for the French major TOTAL.

The company has announced that its drilling of the Luiperd prospect, which follows up the play opening 2019Brulpadda discovery, has yielded another “significant gas condensate discovery” on the Block 11B/12B in the Outeniqua Basin, 175 kilometers off the country’s southern coast.

The Luiperd well was drilled to a total depth of about 3,400 meters and encountered 73 meters of net gas condensate pay in well-developed good quality Lower Cretaceous reservoirs. Following a comprehensive coring and logging program the well will be tested to assess the dynamic reservoir characteristics and deliverability.

“We are very pleased with this second discovery and its very encouraging results, which prove the world-class nature of this offshore gas play,” said Arnaud Breuillac, President Exploration & Production at TOTAL. ‘’With this discovery and the successful seismic acquisitions, Total and its partners have acquired important data on the Paddavissie fairway, which will help to progress development studies and engage with South African authorities regarding the possible conditions of the gas commercialization.”