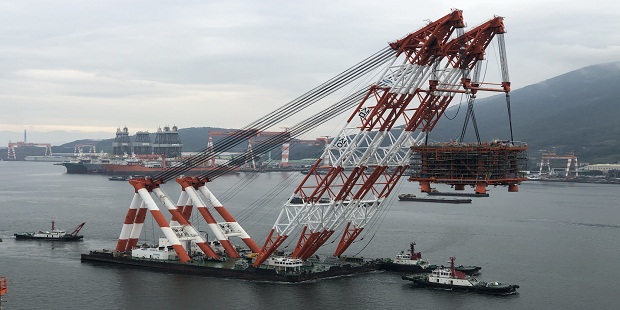 The lifting and installation of the last of the 13 topside modules, “configuring the entire gas treatment and liquefaction plant”, was announced by ENI, the Italian energy company which will operate the facility.

With this milestone, first gas from Coral-Sul FLNG is on course for 2022. “The massive 70 thousand tons topside was lifted onto the hull one module at a time and is now complete. However, construction continues with integration and commissioning activities” declares Roberto Dall’Omo, ENI’s General Manager on the Rovuma Basin project.

ENI discovered the Coral field in Area 4 licence Mozambique in 2012, a year after it encountered the Mamba field in the same basin: Rovuma. It estimates 16Trillion cubic feet estimated recoverable reserves of gas in the former.

The Coral Sul FLNG (meaning Coral South) is one of two projects on the field; farther down the line, the company expects to also develop the reserves in the north of the field under a project christened Coral North. ENI’s partners in Area 4 include ExxonMobil and CNP), Galp, KOGAS and the Mozambican state hydrocarbon company Empresa Nacional de Hidrocarbonetos (ENH) E.P.

These same partners are also involved in another project: the 15MMTPA Rovuma LNG facility, a much bigger, onshore plant which will be operated by ExxonMobil. The Final Investment Decision for that project has stalled.

ENI claims that the Coral-Sul FLNG, with a capacity of 3.4Million tons of liquefied gas per year (MMTPA) is the world’s first newly-built deepwater floating liquefaction plant.

It is based on six ultra-deepwater wells in the Coral Field, at a water depth of around 2,000 metres, feeding via a full flexible system the Coral-Sul FLNG.