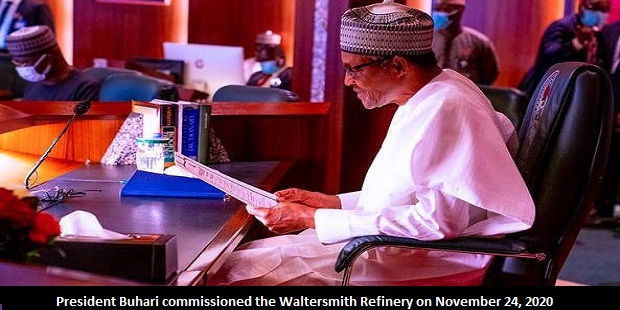 By Foluso Ogunsan, in Ibigwe

The Waltersmith Refinery was commissioned by President Buhari on November 24, 2020, speaking virtually to a packed audience including two state governors, a host of traditional rulers, heads of oil and gas regulatory agencies (NNPC, NCDMB), local CEOs of oil majors and independent E&P companies as well as oil service companies.

The latest update from the Department of Petroleum Resources (DPR), the industry regulator, cites the 7,000BOPD OPAC refinery in Kwale, in the country’s Midwest, as Nigeria’s likely third functioning, privately run refinery, having just been completed and awaiting commissioning.

Under construction are two others: The 500,000BOPD Dangote refinery is 71% completed, says the DPR‘s report, and the 6,000BOPD Edo Refinery is also far gone. (It is instructive that, in the DPR’s books, the Dangote Refinery is not listed as a 650,000BPD refinery, as widely described in the media, but as a 500,000BPD facility).

The widely publicized  Elko Petrochem & Refining Company is not yet under construction, according to the DPR update.

Nor is the Petrolex Oil and Gas refinery, for which an ‘authority to construct’ (ATC), was granted in December 2018.

There are 16 proposed refineries that have been granted authoritisation to construct, but are not in construction stage.

This piece is slightly updated from the original article, published in the October 2020 edition of the Africa Oil+Gas Report.