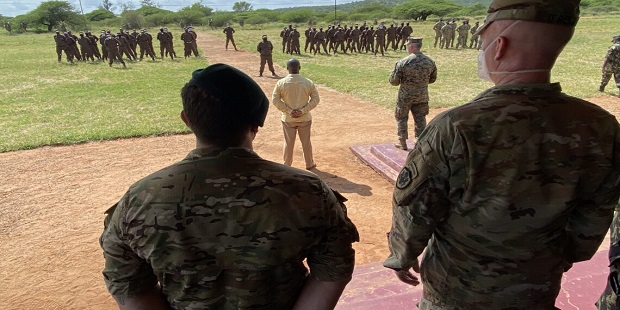 With $4Billion loan committed by the US Exim Bank to the TOTAL led LNG project in Mozambique, and ExxonMobil’s involvement in a separate project, it had long been anticipated that the US would show serious interest in the violent assault of the Islamist insurgents close to sites of the proposed LNG plants in the north of the country.

Now the US Special Operations Forces have begun training Mozambican marines as part of efforts to combat the jihadists’ insurgency.

The U.S. Embassy in Mozambique announced the two-month training programme, called Joint Combined Exchange Training, describing it as an initiative which “reflects a new U.S. commitment against the jihadist organization Ansar al-Sunnah, which is active in the gas-rich Cabo Delgado province”.

On March 11, 2021, Washington officially added Ansar al-Sunnah to its list of terrorist organizations. The U.S. State Department said the insurgent group, which it renamed ISIS Mozambique, is closely linked to the global leadership of the Islamic State.

The embassy statement says that the “United States prioritizes the respect for human rights, protection of civilians, and engagement with civil society in all security assistance. The United States is committed to supporting Mozambique with a multifaceted and holistic approach to counter and prevent the spread of terrorism and violent extremism.  This approach addresses socioeconomic development issues as well as the security situation.  Civilian protection, human rights, and community engagement are central to U.S. cooperation and are foundational to effectively counter the Islamic State in Mozambique”.

Violence in Cabo Delgado has, since 2017, resulted in 2,500 deaths and forced 670,000 people to flee their homes. According to the United Nations, about 1.3 million people need humanitarian assistance.