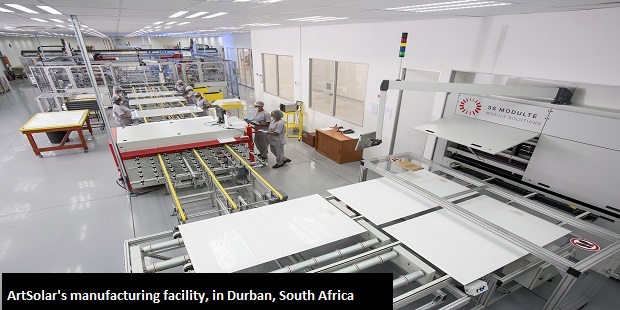 Shangai based LONGi Solar, is partnering with ARTsolar, a South African manufacturer based in Durban, to launch a new, state-of-the-art, 500 MW per year, solar PV panel assembly facility.

The plant is expected to commence assembly and stockpiling of panels in August 2021, for delivery starting in the first quarter of 2022.

ARTsolar, an 11-year-old, 100% South African-owned company, currently runs a PV panel production line designed for a capacity of 300 MW a year. But the plant has struggled in the last five years, operating significantly below this level, largely due to the halt of the country’s renewable energy bid programme between 2015 and 2019.

The partnership between LONGi Solar and ArtSolar is, however, enabled by the return of the South African government to the renewable energy space. On March 19 2021, Gwede Mantashe, Minister of Energy, announced preferred bidders for the Risk Mitigation IPP Procurement (RMIPPP) programme, which alone will require some 2,2Million solar PV panels with a total capacity of about 1300 MW for delivery of power into the grid by the end of August 2022. To achieve this ambitious target, the projects must reach financial closure by the end of July 2021.

Two more procurement rounds of green energy from solar PV projects, each with a capacity of 1000 MW, are expected to commence in 2021, facilitated by the IPP Office of the Department of Mineral Resources and Energy for South Africa’s Renewable Energy IPP Procurement (REIPPP) programme in terms of the national Integrated Resource Plan for electricity, IRP 2019.

LONGi and ARTsolar have ambitions to be the major supplier of locally made solar PV panels for the RMIPPP and REIPPP programmes, and for subsequent procurements of solar power in South Africa and the region, for mainly utility-scale PV power plants.