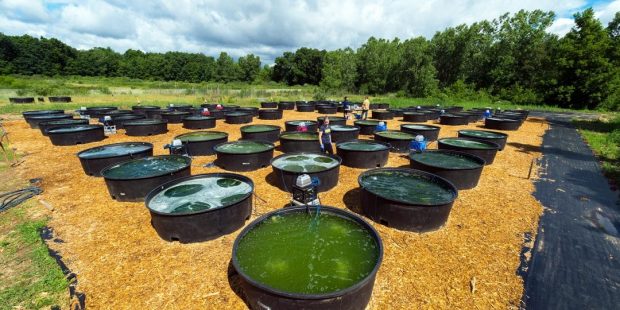 It’s been 14 years since Nigeria gazetted its Biofuel Policy and Incentives, but the country can boast of next to nothing in domestic biofuel production.

Nigeria, being heavily dependent on fossil-based fuels, took this bold step in June 2007 to reduce the rate of environmental pollution in the country, as recognised by the United Nations (UN) as a universal problem causing climate change.

In essence, the world wants to cut off fuels that are bad for the environment and biofuels are in tandem with the demand for clean energy, producing less emissions than petroleum-based fuels.

As the national debate rages in Nigeria about removal on subsidy on crude-derived gasoline, and cleaner and cheaper alternatives are considered, infrequent mention is made of biofuels, not for cost, but for cleaner air.

Nigeria could also be a top producer of biofuels and even an exporter, since the nation is blessed with vast resources in energy crops and biodegradable waste used in their production. Regardless of the many advantages of biofuels, the  narrative is entirely different in the nation today.

In 2019, Ibe Kachikwu, Former Minister of State for Petroleum, while speaking at a biofuel sensitisation workshop emphasised the economic value of biofuels.

“I believe biofuel will soon become our foreign exchange earner, if we can put our minds and might into it. We can produce crude and fire gas but, ultimately, the only way to sustainably reach every nook and cranny and every citizen of our country with some level of energy supply, is to look towards natural resources such as solar, wind, water resources and biofuel,” he said.

In the National Biofuel Policy and Incentives published in 2007, a direct reference was made to the government’s mandate to the Nigerian National Petroleum Corporation (NNPC) to create an Automotive Biomass Programme in 2005 which would establish an environment for the take-off of a domestic fuel ethanol industry.

With the Automotive Biomass Programme in place, the National Biofuel Policy and Incentives was gazetted in 2007 to further propel the domestic production of biofuels. It aimed to “achieve 100% domestic production of biofuels consumed in the country by 2020.” While the policy directed several bodies to contribute to this national outlook, the downstream petroleum sector and the agricultural sector have integral roles to play in the accomplishment of the programme.

Unfortunately, there is a gap between the policy demand and actualisation as a result of several underlying issues. Nigeria still relies on importation of fuel ethanol, an additive for gasoline whilst still grappling with non-implementation of its biofuel policy.

The World of Biofuels

Biofuels refer to “fuel ethanol and biodiesel and other fuels made from biomass and primarily used for automotive, thermal and power generation.” It’s main claim to preference over fossil-based fuels is its renewable and environment friendly chemistry.

Fuel ethanol is blended with gasoline for more environmentally-friendly emissions and this blend has proven to improve the quality of fossil-based fuels by oxygenating the fuel thereby resulting in less carbon emissions and higher octane levels.

For this reason, some countries are imposing a mixture of transport fuels with biofuels in order to reduce greenhouse gas emission. In the United States, more than 98% of their gasoline is mixed with ethanol forming a 90% gasoline and 10% ethanol mix.

In Nigeria, the biofuel policy projects a 90% gasoline – 10% fuel ethanol mix while a 20% blending ratio is to be deployed for biodiesel with the Nigerian National Petroleum Corporation (NNPC) enforcing the blending requirements. With the daily national consumption of gasoline estimated by the department of Petroleum Resources, DPR to be 38.2Million litres of gasoline per day, Nigeria would require 3.82 million of fuel ethanol per day to meet the fuel ethanol-gasoline blend goal. This is a huge responsibility for biofuel production in the country considering its present state.

In 2018, Nigeria spent $33Million on the importation of ethanol from the U.S and it was the second most imported agricultural product from the U.S into Nigeria, constituting about 48% of total ethanol import into the country, according to the United States Department of Agriculture (USDA), Foreign Agricultural Service (FAS).

This speaks volume about the country’s capacity for the achievement of the 100% domestic production goal. Apart from Nigeria’s failure to achieve its stated goal, importation puts undue pressure on the nation’s economy and weakens local production initiatives. With over-reliance on foreign imported fossil-based fuels and its economic impact on the nation, it is wise to avoid trailing the same path with biofuels. 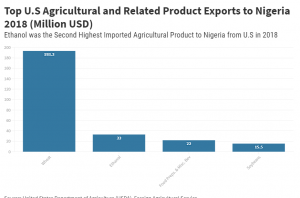 Since crop feedstock used for the production of biofuels have to be cultivated in large scale, there’s been growing concerns about its competition with food production in the country, as all the biofuel feedstock cited in the policy are food crops except jatropha. Apart from that, Nigeria is capable of cultivating the designated biofuel feedstock, including oil palm, jatropha, cassava and sugarcane. 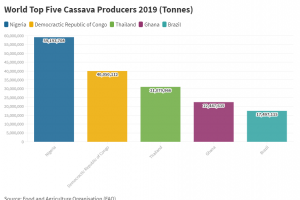 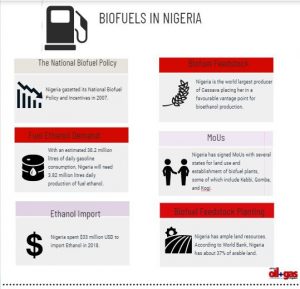 In 2012, Global Biofuels Ltd signed a ₤2Billion deal with the Nigerian Government for a biofuel production complex at Ilemeso, Ekiti state, Nigeria. TV

Similarly, Kogi State Government, under the leadership of Yahaya Bello signed a MoU with the Nigerian National Petroleum Corporation (NNPC) for the establishment of biofuel projects in the state.

Foreign investments and private sector investment have also been made since the policy was published in 2007.

The NNPC signed MoUs with State Governments for the building of fuel ethanol plants and cultivation of biofuel feedstock, some of which include Kogi, Kebbi, Gombe, Benue, Anambra, Cross Rivers and Ondo

Despite these initiatives, the NNPC has still not kicked off large scale commercial production of biofuels as directed by the policy.

On the 28th of February 2018, he also revealed at the 39th Kaduna Trade Fair that NNPC was driving investment in renewable energy to develop biofuel production through the Renewable Energy Division in a press release.

Both reports were bound by the same promise to kick start large scale biofuel production with a bleak timeline for accomplishment.

In 2021, the Gombe State Government reportedly expressed willingness to partner with the NNPC to actualise the sugarcane fuel ethanol project in the state in 2021.  In the same report, the Group General Manager, Renewable Energy Division (RED) of the Nigerian National Petroleum Corporation (NNPC), David Bala Ture, revealed that despite efforts to actualise the biofuel project in Gombe State, it had not come to fruition for the past 15 years.

This is the backstory of many biofuel projects in the country. Some projects are abandoned, others are suffering from lack of cooperation from the various parties involved in the deal and some others, lack of technological advancement.

An effective policy, however, will solve a number of these problems.

Although Nigeria has a biofuel policy in place, it has not fully implemented its policies since 2007. In fact, in 2010, the policy was reviewed by the Petroleum Products Pricing Regulatory Agency (PPPRA) and a number of committee members, to address the loopholes in the official gazette.  However, there has been no concrete agreement between the key players and the governmental bodies involved to utilise the policy’s directive and this has caused setbacks in the implementation of the policy.

The private sector has been making efforts to produce fuel ethanol and biodiesel but lack of proper infrastructure is deterring large scale production by private companies.

Part of the challenge, argues Ejikeme Nwosu, Director, Lumos Laboratories Nigerian Limited, who has worked on conversion of waste to energy sources in the last 14 years, is the lack of infrastructure and grants to private initiatives for the production of biofuels. “The private sector is filled with masterminds ready to work with the sector once the policy is fully implemented and when the government pays more attention to them,” Nwosu explained.