Suez Canal: Ever Given Still Hasn’t Given Way 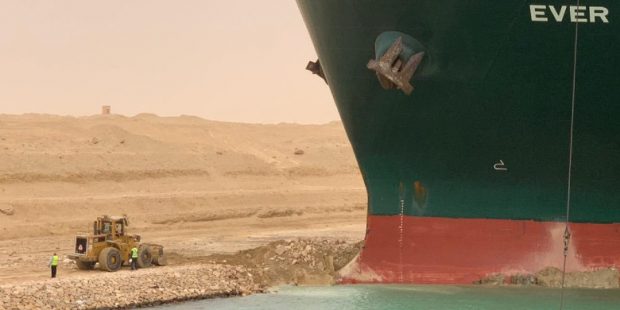 The MV Ever Given, the giant vessel which blocked the Suez Canal for close to a week in March 2021, still hasn’t moved away from the region.

Its seizure, by the Suez Canal Authority (SCA), is the subject of an appeal to be heard in the Ismailia court (one of the Egypt’s seven courts of appeal), in the first week of May 2021.

Ever Given’s Japanese owner, Shoei Kisen Kaisha, is appealing for the overturn of a lower court’s decision, which earlier in April 2021, gave the SCA the permission to arrest the ship. The SCA is demanding $916Million in compensation for the six-day blockage, a sum that Shoei Kisen’s insurer, the UK Club, has dismissed as extraordinarily large.

Ever Given forced a standstill of shipping activity when, on March 23, 2021, it got wedged sideways across the canal, a critical global trade artery that connects the Mediterranean and the Red Sea. The initial reason proffered for the accident was that high winds and a dust storm made the crew lose control of the ship. The 400 metrelong, 59 metre wide, 224,000 tonne ship is one of the largest cargo vessels in the world.  Pictured on its side, the ship presented a rough sketch of a skyscraper.

“The appeal against the arrest was made on several grounds, including the validity of the arrest obtained in respect of the cargo and the lack of supporting evidence for the SCA’s very significant claim,” the UK Club complained.  SCA’s $916Million demand comprises a $300Million “salvage bonus” and another $300Millionfor “loss of reputation,” among other items. The claim does not factor in the cost of salvaging the Evergreen-chartered vessel, which “owners and their hull underwriters expect to receive separately.”

An eight-person team from Dutch marine response firm SMIT Salvage as well as a team from Japanese owned Nippon Salvage were hired by Shoei Kisen Kaisha to move the ship. The rescue operation also involved tugboats and dredgers.

The MV Ever Given, was enroute from China to the Netherlands when the accident occurred.