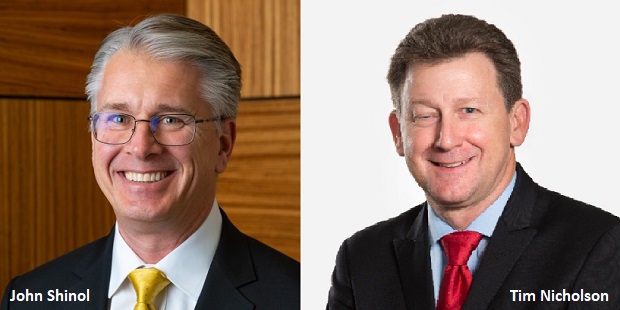 Kosmos Energy has promoted Tim Nicholson to Senior Vice President (SVP) and Head of Exploration, and John Shinol has been promoted to SVP and Chief Geoscientist.

Nicholson and Shinol joined Kosmos in 2018 and have been integral to the company’s infrastructure-led exploration (ILX) efforts over that period, primarily in the U.S. Gulf of Mexico and Equatorial Guinea. The two earth scientists were both formerly at Cobalt International Energy where they were responsible for several large discoveries in West Africa (Angola) and the U.S. Gulf of Mexico (North Platte, Anchor, and Heidelberg).

Tracey Henderson, the previous SVP of Exploration, has left Kosmos to pursue other interests.

Andrew G. Inglis, Kosmos Energy’s chairman and chief executive officer said: “As we see momentum return to our ILX activities in 2021, I am delighted to have two highly experienced, oil finders leading our exploration efforts. Tim and John have a long track record of proven-basin exploration success in our focus geographies of West Africa and the U.S. Gulf of Mexico. We have a deep hopper of high-quality ILX opportunities, a strong bench strength of exploration talent and have already seen early success in 2021. I would like to thank Tracey for her time at Kosmos, particularly her contribution to the company’s frontier basin success in the past.”