Funding of E&P Business in Nigeria; Strategies for Sustainability 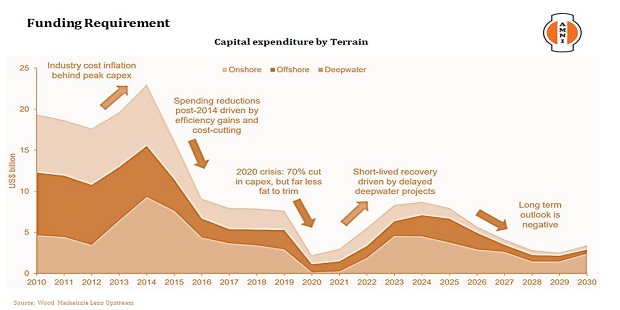 Twenty years ago, 90% or more of all the oil and gas licenses in Nigeria were held by the International Oil Companies (IOCs), most of them global oil majors in their own right. The rest were either unassigned or held by a sprinkle of Nigerian independents.

By 2020, about 75% of the oil and gas licenses in Nigeria were held by the IOCs while the rest were held by the Indies or unassigned. The independents came into being, largely in the 1990s, courtesy of some tenacious Nigerians with the undying support of the then minister of petroleum resources, Jubril Aminu, a Professor of medical sciences, when the concessionary block award was approved by the government of General Ibrahim Babangida.

Production capacity of the independents hovered around 2% of the nation’s total output, until the majors’ divestment exercises of between 2013 and 2016, in which several onshore assets with reserves ranging from 200Million barrels to 1.2Billion barrels were sold and purchased and a new class of independent producers emerged with some, with some having production capacity in excess of 70,000 barrels of oil per day. The determining factor of the health and well-being of the oil and gas industry is the price of crude oil.

The capital spend of the oil industry is highly influenced by the robustness of oil prices. Between 2009 and 2015, when oil prices were averaging about $100 per barrel, the Nigerian oil industry was spending an average of $18Billion per annum. However, between 2016 and 2019 when the prices of oil fell to an average of $60 per barrel, capital spend during the same period fell to an average $7.5Billion per annum. 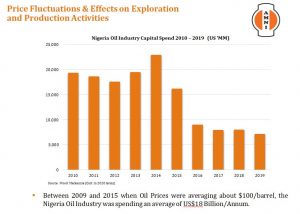 The proven crude oil reserves growth between 2010 and 2016 mirrors the price of oil during that period. The crash of 2015 significantly affected the reserves growth from 2017 and beyond.

The only aberration which I can find in the statistics of Nigerian Oil Industry activities is the decline of production from 2010 to 2016. One would have expected that as exploration and appraisal activities grew and crude oil reserves grew, so would the production activities, but that is not the case.

Fast forward to 2021: One thing is for certain, capital spend in 2020, 2021 will be significantly reduced, a situation which will impact spending on core  exploration activities.

SO, WHAT ARE THE STRATEGIES FOR SUSTAINABILITY?

By the fourth quarter of 2019, oil prices were getting restless and $60 barrel oil was looking unsustainable. 2020 started with some optimism that things might turn around, with $65 per barrel average price in January and February. In fact, at a point in January, we had a $70 per barrel oil.

Then came the surprise assault of COVID-19 and the whole world was caught flat-footed. By the end of that first quarter of 2020, oil prices had crashed to $18 per barrel. The world was awash with oil, as over $100Million barrels of homeless crude roamed the seas. Tankers on the world’s main water ways were being used for emergency storages because the storage terminals were filled to capacity.

The most readily impacted by this free fall in oil prices in the Nigerian oil and gas industry were:

1 The Federal Government of Nigeria through NNPC whose revenues fell by more than 70%.

2 The independent oil producers whose income comes from near-marginal field operations and who live from month-to-month and from hand-to-mouth and at the mercies of their bankers. Some were lucky to have hedged early but none was spared the agony of budget balancing. Oil men became finance strategists overnight, sourcing for funds.

Funding problems for E&P oil and gas companies have been around for a number of years, even before the pandemic induced destruction of demand for crude.

It is important to note here that facilities granted by banks to the marketers of petroleum products, such as diesel and gasoline marketers, are included in the count of what is given to the oil and gas sector and amount to 50% of the total financing granted to the oil and gas industry.

The major oil companies which operate in Nigeria are generally self-funding for their E&P activities. They spend shareholder equity funds on technical operations, while they borrow, from local banks, mostly naira for sundry services like staff salaries and emoluments and contractor naira portion of their invoices among other things. However, you will find out that the independents depend mostly on local bank financing and very little on shareholders equities. Therefore, the ones who feel the most impact of crude oil price collapse in their businesses are the independents. Between 2014 and 2019, when the industry suffered a major price collapse, even at $60 per barrel oil, credits from banks to the oil and gas industry dropped from the high of $12.5Billion in 2014 to a low of $9.5Billion in 2019, a whopping 24% fall in available credit.

One factor that has exacerbated the credit crunch for the independents from the local banks is the Central Bank of Nigeria (CBN)’s sectorial limitation; that is, how much of a bank’s portfolio can be allocated to a particular industry, which has been falling from a high of 28% in 2014 to a low of 22% in 2019. Meanwhile, the petroleum products market (downstream activity) and the IOC naira demand drastically reduced what eventually was available for field operations for Nigerian indigenous E&P companies. This has led to high financing cost.

Today, there are at least 13 Nigerian owned independent oil and gas companies with reserves of almost 4Billion barrels of oil and producing close to 500,000 barrels of oil per day. If these reserves are to be developed at an average cost of $5-$10 per barrel, the companies will require between $20- $40Billion. The top ten Nigerian banks all together give a total of about $5.5Billion in loans to the Nigerian oil and gas industry, including the marketers of petroleum products.

Meanwhile, more players are upcoming, as the marginal field bid round is finalized. These players will be added to the list of Nigerian independent producers who require funds to appraise, develop and produce their newly acquired assets.

There are numerous proposals on the way forward.

It is imperative for the Nigerian government to encourage licensing a purely oil and gas bank with significant subscription to the shares of the bank by the government. An oil and gas focused bank will understand the market fundamentals and the rudiments of running an oil and gas exploration and production company.

The trend in prices will be very dependent on new production development especially in the deep-water. If the past is the key to the future, let us consider events in the oil price recovery from the 2001 price dip, before the climb to $50 a barrel in 2005, which is a period of 4 years. Recovery to high prices might take longer or never as the industry competes with the challenges of low carbon emissions demand for climate change mitigation. 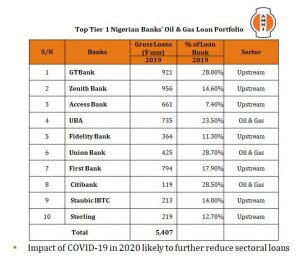 In conclusion, Nigeria independent oil and gas producers currently account for 25% of production of the total national output. We have not disappointed the government in domesticating the skillset of oil and gas exploration development and production. It will be a shame if we do not do all in our power to assure the survival of the independents.

There are several other mitigating options that may be considered. Most of them will require that extant laws are changed but for ones that do not require much of interference from legal constitutional challenges, I believe this proposal that has

been seriously considered about the creation of an oil and gas bank should be put into serious consideration.

It is imperative for government to encourage the licencing of an Oil &Gas Bank. An oil and gas focused bank will understand the market fundamentals and the rudiments of running an E&P business.

Abridged version of the Keynote address delivered by Tunde Afolabi, Chairman, Amni International Petroleum Development Company, at the 45th anniversary lecture of the Nigerian Association of Petroleum Explorationists, NAPE. Mr. Afolabi a tiled Nigerian traditional chief, is a former president and Fellow of NAPE, with a distinguished oil and gas industry career spanning 47 years. The speech was transcribed to text by Bunmi Aduloju, reporter and researcher with Africa Oil+Gas Report.