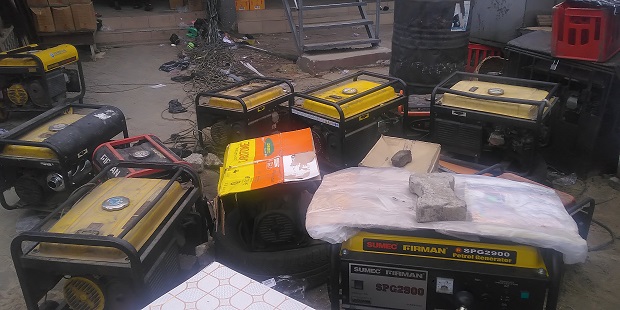 The penurious power supply in the country has paved way for a thriving electric generator market. Many Nigerians self-generate power using fossil fuel-powered generators that harm the environment.

“I opened one cartoon of mackerel fish costing about ₦28,000 a week ago. And I have not finished selling it. It is part of it that got spoilt. I cannot sell them to my customers because they will complain. Still, I have to pay ₦4000 at the end of the month for electricity.”

That was Faith Okorochukwu, fondly called Mama Kewe, a retailer of frozen poultry products and seafood for nine years, lamenting how erratic electricity supply has been affecting her sales. Mama Kewe plies her trade at the sprawling Alakija Market, one of the smallest conglomerations of shops on the Lagos -Badagry Expressway in the west of Lagos, Nigeria’s financial hub.

Now, imagine that when Mama Kewe bought a bigger 9KVA petrol generator, she was still concerned about not causing noise and environment pollution to her fellow traders.

“I cannot place my new generator in front of my shop because it is too large for the small space and then again, because the shops are packed, I don’t want to disturb my neighbours with the noise and the smoke,” she said pointing to the tiny walkway in the anterior of her shop.

So, she further piles up losses.

Unlike Mama Kewe, ‘Engineer’ John Ukeagu’s computer and printing business centre runs fully on generator. Situated on the first floor of a building at the same Alakija complex, his generator sits at the entrance of his shop. This usage comes at a high financial cost.

“I spend about 9000 naira every week on fuelling my generator and I still pay the authorities for the power supplied,” he said. “Today, I opened business around 8am and since then, I have been using my genset until about a few minutes ago (around 2pm), when power was restored”.

When asked which served his energy needs better between his generator and the national grid, he said, “Without my genset, I would not have any business here.”

The experiences of Mama Kewe and Ukeagu are not isolated; they are what small and medium scale entrepreneurs contend with to serve in an epilepsy inflicted electricity supply society.

According to the PWC MSMEs 2020 Survey, Nigeria’s MSMEs account for 96% of the total number of businesses in the country and contribute about 50% to the national GDP.

However, a research conducted by the Centre for Democracy and Development and SOAS, University of London, estimates that SMEs have about 1 to 5 hours of power supply from the national grid and so, have to self-generate.

A Fortune for Electric Generators

Nigeria is among the top six countries generating energy with back-up generators, together with India, Iraq, Pakistan, Venezuela, and Bangladesh, according to the International Finance Corporation, (IFC) and the collective capacity of small gasoline generators alone is eight times more than Nigeria’s entire national grid, according to a report by Dalberg, a non-profit R&D institute.

The same report estimated that Nigerians spend $12 billion every year on buying and operating small generators, with about 22M homes and small businesses relying on small gasoline generators.

With these figures, it is not startling to find the huge amount of money spent on importation.

“We have had frequent episodes of fuel scarcity and even, a few months ago, the government was contemplating hiking the price of fuel. There was a whole lot of noise about that. When you factor that into consideration and consider the number of people that use generators, you will be surprised at the cost Nigerians pay for energy,” he asserted.

He further explained that Nigeria’s case is peculiar because of the population figure of more than 200 million people and Nigeria’s inability to meet the energy needs has led to dependence on the use of electric generators.

A World Bank study showed that the top three sources of PM2.5 in Lagos are road transport, industrial emissions and generators. Furthermore, it stated that, “In Lagos alone, about half of the city’s total energy demand is met by generators, the third source of PM 2.5.” Called particulate matter, PM2.5 at high level brings concern for people’s health.

“What generators produce as exhaust mostly comprises carbon dioxide, carbon monoxide, zinc and other chemicals. It is very evident that some of these chemicals are very harmful to human health and to the environment, he delineated.

“Based on the chemical composition of carbon dioxide particles, when it is emitted into the atmosphere, it traps heat,” he noted.

The pledge by Nigeria’s government to cut down emission by 20% in 2030 will be aided by the phasing out of these generators, a Dalberg report outlined.

“Replacing gasoline generators presents a big opportunity as they will produce 22% of targeted reductions from the energy sector in 2030, it stated.

Ban on “I better Pass My Neighbour” Generators

In 2020, a bill sponsored by Senator Bima Muhammadu Enagi to ban the use and importation of generating sets was received with hostility by Nigerians due to the deplorable power supply prevailing in the nation, according to a PM report.

But before then, there had been a ban on small generators.

In November 2015, the importation of small generators popularly known as “I better pass my neighbour” was banned because of its deteriorating environmental effects and health risk.

However, a young business owner, who preferred anonymity at the Trade Fair Market, Ojo, claimed that he was a bulk importer of small generators.

“We bring in two containers of tiger generators every month, he said.

Similarly, two other contacts from Alaba Suru and Alaba International mentioned that they had a large stock of these generators and they could sell in bulk to anyone willing to buy them.

It is going to be very difficult to track the import on these generators, explained Michael Omolaja, because import comes through the informal sector.

He further explained that, “Generators importation would most likely pass through the port. Even if the port is supposed to be more secure than the land borders, we still don’t have efficient control”

These mini generators cost about 40,000 naira. However, its sustainability is questionable.

“The payback period of solar is usually between one to three years. If an equivalent amount of money is spent on generators, you would have gotten the money you spent on solar back in sixteen months. And so, whatever your system is generating for the next thirty years or thereabout is just free power,” he explained. 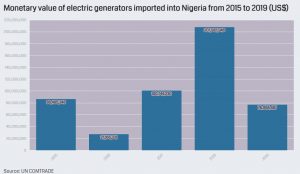 But the upfront cost of solar alternatives is way higher than that of electric generators.

According to a Dalberg report, “Solar alternatives to gasoline generators exist in Nigeria, but are currently 15-20x more expensive. A typical 1.5 kVA gasoline generator costs $150, while a 1.5 kVA solar system costs $2,500.”

Emmanuel Omolaja blamed the use of electric generators on the increasing exchange rate.

He opined that the price of solar has risen overtime because of the exchange rate of dollar-to-naira.