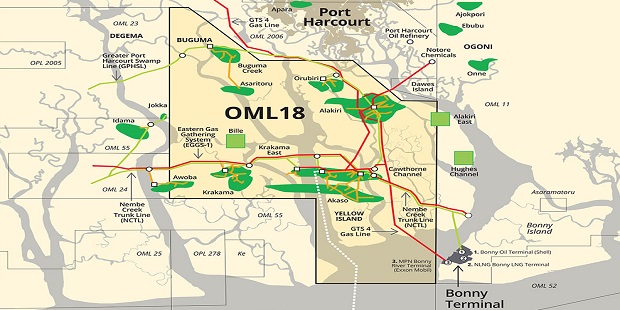 “At this stage, heads of terms for such a transaction have not been agreed.  Any transaction would involve San Leon acquiring the outstanding shares not already owned by San Leon in relation to Midwestern Leon Petroleum Limited (MLPL)”, San Leon says in a release, and then it adds:

It says that it is considering making further debt and equity investments in Energy Link Infrastructure (Malta) Limited (ELI), in addition and connected to any acquisition of Midwestern Leon Petroleum Limited MLPL.

ELI is the vehicle through which San Leon, Midwestern, and Eroton are constructing an alternative pipeline and other evacuation facility to export crude produced in OML 18, whose production suffers significant losses in evacuation through the Nembe Creek Trunk Line. “The acquisition by San Leon of the outstanding shares in Midwestern Leon Petroleum Limited not already owned by San Leon would constitute a reverse takeover under rule 14 of the AIM Rules for Companies (the “AIM Rules”), San Leon says.

And this is where the confusion in the Nigerian press lies: Midwestern Oil & Gas (MOG) is not Midwestern Leon Petroleum Limited (MLPL). The stories in the Nigerian press have confused the two. MLPL is part of the structure through which San Leon holds its current 10.58% indirect economic interest in OML 18.  San Leon currently has a 40% equity interest in MLPL.  MLPL has a 100% equity investment in Martwestern Energy Limited (Martwestern), which in turn has a 98% economic interest in Eroton Exploration and Production Company Limited (Eroton), which holds a 27% working interest in OML 18 and is its operator.

San Leon and Midwestern are in discussions for the Company to acquire the remaining 60% equity interest in MLPL from Midwestern.

“The consideration for this, and other matters, would be satisfied by the issuance of a substantial number of new ordinary shares in San Leon to Midwestern, such that Midwestern would become the majority shareholder of San Leon”, San Leon says.

MLPL’s most recent unaudited accounts for the year to 31 December 2020 state that the company made a loss before tax of approximately $93.8Million and showed total assets of $408.5Million.

“The proposed transactions described above are at an early stage and will therefore be subject to a number of factors, including, inter alia, the completion of due diligence, negotiation of transaction documentation, regulatory approvals, a “whitewash” under the Irish Takeover Code and shareholder approval. As such, there is no certainty that these transactions will proceed nor any certainty regarding the terms on which they would proceed”. Midwestern currently holds more than 10% of the Company’s ordinary shares. Accordingly, Midwestern is classified as a related party under the AIM Rules and the transactions above in which Midwestern has an interest will therefore be treated as transactions with a related party pursuant to rule 13 of the AIM Rules”, San Leon explains.