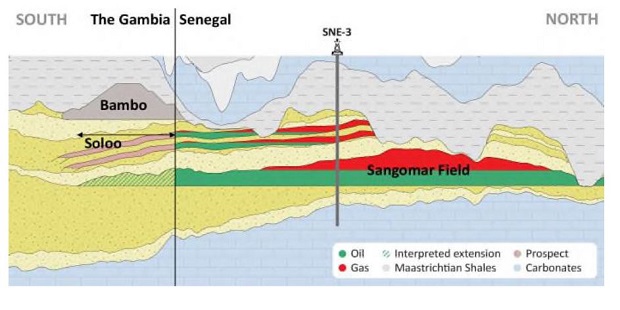 Australian explorer FAR Limited, says it has locked in the timetable for drilling the Bambo-1 well offshore The Gambia by executing a contract with Stena Drillmax Ice Limited to commence drilling operations in the fourth quarter of 2021.

The Bambo-1 well in Block A2 offshore The Gambia, is designed to drill into three prospects with a total estimated recoverable, prospective resource of 1,118MMBbls (arithmetic sum of the Best Estimates, 559MMBbls net to FAR) and the chance of geological success for the various horizons range from 7% to 37%, FAR says in an extensively detailed release.

“These target reservoirs are: 1. Soloo – The extension of the hydrocarbon-bearing reservoirs in the adjacent Sangomar Oil Field, offshore Senegal. 2. Bambo and Soloo Deep – two additional prospects, not drilled during the Senegal drilling campaigns”, the company reports.

These two prospects carry a lower chance of success but higher volume of hydrocarbons, FAR explains. “The technical assessment of the Bambo Prospect has greatly benefited from FAR’s extensive database and experience in the region and learnings from FAR’s involvement in the 11 successful wells in Senegal and the Samo-1 well drilled in 2018”.

FAR is Operator with a 50% working interest in the A2 and A5 permits with its joint venture partner, PC Gambia Ltd, a subsidiary of Petroliam Nasional Berhad (PETRONAS).

If successful, a discovery could result in a standalone development which would be The Gambia’s first oil production.