Shell in Transition: Plan for the Worst, Hope for the Best! 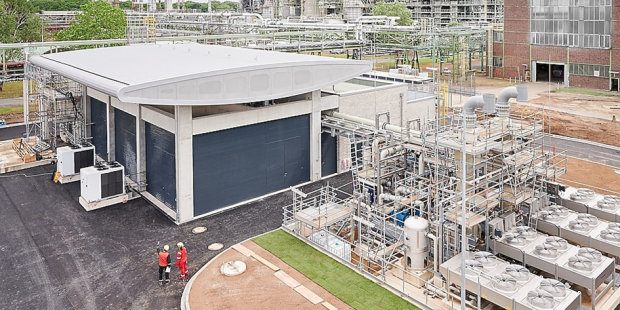 Shell’s unveiling of its Refhyne Hydrogen Project, located at its Energy and Chemicals Park in Rhineland, Germany has attracted much attention. Plans are underway to expand the capacity of the electrolyzer from 10 Megawatts to 100 Megawatts. Shell also intends to produce sustainable aviation fuel (SAF) using renewable power and biomass in the future. A plant for liquefied renewable natural gas (bio-LNG) is also in development.

As part of the Refhyne European consortium and with European Commission funding through the Fuel Cells and Hydrogen Joint Undertaking (FCH JU), the fully operational plant is the first to use this technology at such a large scale in a refinery.

“Shell wants to become a leading supplier of green hydrogen for industrial and transport customers in Germany,” according to Huibert Vigeveno, the company’s Downstream Director. “We will be involved in the whole process — from power generation, using offshore wind, to hydrogen production and distribution across sectors. We want to be the partner of choice for our customers as we help them decarbonize.”

Shell has a target to become a net-zero-emissions energy business by 2050. The company plans to transform its refinery footprint to five core energy and chemicals parks, reducing the production of traditional fuels by 55% by 2030.

Does Shell’s goal for its energy and chemical parks fit within the verdict brought down by the Dutch courts ordering Shell to cut by 2030 its CO2 emissions by 45% compared to 2019 levels? Is Shell still in charge of its energy transition scenariosor is it desperately playing catch-up to ensure that its influence and strategy has an impact on the swiftly changing energy landscape?

• Energy system will be transformed-speed is the issue

• Transformation will have costs and benefits

Shell in its Sky 1.5 Scenario anticipates a rapid and deep electrification of the global economy, with growth dominated by renewable resources. Global demand for coal and oil peak in the 2020s and natural gas in the 2030s.

In the sectors that are more difficult to electrify, liquid and gaseous fuels are progressively decarbonized through biofuels and hydrogen.

“Globally, the world is proceeding towards achieving the stretch Paris ambition-temporarily rising above and then limiting average global warming to 1.5C above pre-industrial levels before the end of the century-accelerated decarbonization now”.

Before returning to Shell…a short summary of the competition.

The Remainders: ExxonMobil and Chevron, two companies who continue to believe that decarbonization is only being done within the confines of the hydrocarbon world. CCS (Carbon Capture and Storage) is only understood to at least give a pretense that the companies are tuned in to the energy transition. Look forward to both companies developing a closer relationship to maintain economies of scale.

First Adapters: TOTALEnergies, in the summer of 2020, took the unusual step of writing off $7Billion impairment charges for two oil sands projects in Canada.  Both projects at the time were listed as ‘proven reserves’. By declaring these proven reserves as null and void, TotalEnergies, with one swoop of the pen, cast aside the Petroleum Classification System which was the gold standard for measuring oil company reserves.

TOTALEnergies’ strategy is based on the two energy scenarios developed by the International Energy Agency (IEA): Stated Policies Scenario (SPS) is geared for the short/ medium term; and Sustainable Development Scenario(SDS) for medium/long term.

Taking the “Well Below 2 Degrees Centigrade” SDS scenario on board: TOTALEnergies has in essence taken on a new classification system. By embracing this strategy, the company is the only major to have seen the direct benefit of using the Paris Climate Agreement to enhance its renewable energy base.

Decentralizers: Will BP become the first super-major to become an investment vehicle that is both green and can guarantee shareholders a handsome return on investment? BP is building an investment structure, which requires only a few skilled accountants. The company has either sacked employees or will be delegating BP’s headcount to its joint ventures. The goal is becoming lean and mean, reducing costs and hopefully increasing margins. In short, an investment vehicle.

BP is promising returns in the range of 12% -14% in 2025 –up from around 9% today, financed by a $25Billion divestment fund and a pipeline of 25 oil and gas projects. Oil production will also be reduced to 40% by 2030. To date, the company has initiated a series of joint ventures in order to speed up its transition.

New Energy Giants: New boys on the block, who will provide green leadership and challenge the oil majors.

Engie: in 2021, will spend €11-12Billion on investments across a broad swath of sectors including solar, wind (on and offshore), hydro plants, biogas, and developing gas and power lines, and will have 33GW of global renewable installed capacity by 2021.

Ørsted: By 2030, Ørsted will have an installed capacity of 50GW.

Iberdrola: In the period 2020-2025, Iberdrola will be spending €75 billion on renewable energy and has a pending target of 95GW of installed wind capacity.

Vattenfall: In the Nordic countries Vattenfall has low emissions with practically 100% of the electricity produced based on renewable hydropower and low-emitting nuclear energy.

Shell: In Search of its Soul?

Shell’s energy prognosis is certainly in line with other sources who are sounding alarmed about global warming and the need for rapid de-carbonization. Yet how will this affect Shell as a company? Is the company nimble enough and has the dexterity to ensure it will be a force for good in the next phase of the energy transition? The signs are not encouraging.

In 2020, IEEFA (Institute for Energy Economics and Financial Analysis), evaluated Shell’s green progress. According to Clark Butler, the author of the report, Shell must shift at least $10Billion per annum or 50% of total capital expenditures from oil and gas and invest in renewable energy if they are to reduce their carbon intensity in line with their own stated goals.

Between 2016-2019, Shell spent $89Billion in total investments, of which only $2.3Billion was devoted to green energy. In 2019, Shell’s overall operating costs came to $38Billion and capital spending totaled $24Billion.

Upstream is still on the operating table but the immediate signs are not encouraging. Shell’s Nigerian assets-onshore, and shallow water- are already on the auction block, encouraging Nigeria’s independents to pick up potential assets. Shell, meanwhile, will instead move further downstream to ensure continuity of its gas-related and trading activities in Nigeria. Helping the company to portray a greener image.

Shell is one of the most adaptive of the IOCs in Canada. Noteworthy is that Canada is the world’s 4th largest oil producer at 4.7Million barrels of oil per day and is also a major producer of natural gas. The Canadian government is determined that Canada will be net-zero by 2050. Shell Canada has divested most of its heavy oil-producing assets in Alberta but is still a large producer of gas. Shell also is an operator of the leading-edge Quest carbon sequestration projects near Edmonton, Alberta.  The CO2 is removed from the Scotford heavy oil upgrader. Quest became operational in 2015 and injects 3,600 tonnes of CO2 per day into a deep reservoir. To date, 6.5Million tonnes of CO2 have been stored. Shell is also an operator of the $25Billion LNG plant being built at Kitimat on the west coast of British Columbia. This is the first LNG plant to be built in Canada.

Earlier Shell indicated that it will reduce its Upstream Division to nine core hubs such as the Gulf of Mexico, Nigeria, and the North Sea and no frontier exploration after 2025. If the rush to the global exploration exit continues to pick up speed Shell may well have to reconsider its upstream strategy. Perhaps going so far as to spin the Upstream Division off as a separate entity or joint-venturing with other partners.

Shell’s Integrated Gas Division could prove to be the star asset. For example, Wood Mackenzie’s AET-2 scenario (Accelerated Energy Transition Scenario) predicts that in the following decades market power will slip from OPEC to the giant gas producers such as the USA, Russia, and Qatar.

According to AET-2, the “Era of carbon-neutral gas is born. AET-2 would require $300Billion to support Liquified Natural Gas growth globally and $700Billion to support dry gas development in North America.” Certainly, a sweet sound for Shell’s LNG business.

Downstream could also prove to be a key energy transition asset. Shell’s Refhyne Project, Rhineland Refinery could well become the precedent the company needs to ensure it becomes the leading supplier of green hydrogen, where hydrogen production is powered by renewable energy for industrial and transport customers. Could the Refhyne Project become duplicated many times over to ensure that green technology becomes a key ingredient in the energy transition?

A key remaining issue is how Shell can re-allocate its resources-both financial and technical-and maintain an image of being in control of its energy transition scenarios. Upstream with its huge exploration and development costs is perhaps Shell’s largest impediment to becoming a greener company. Do not be surprised that in the coming months, Shell’s Upstream will find a new home. Freeing up funding needed for Shell’s own energy transition. Also, expect Shell’s Integrated Gas and Downstream and Renewables to get a serious makeover vastly increasing their budgets to ensure market share and a green future.

Finally, do not be surprised that Shell, under pressure from public opinion and its shareholders becomes CO2 neutral in 2030 instead of 2050.

Gerard Kreeft, BA (Calvin University, Grand Rapids, USA) and MA (Carleton University, Ottawa, Canada), Energy Transition Adviser, was the founder and owner of EnergyWise. He has managed and implemented energy conferences, seminars, and university master classes in Alaska, Angola, Brazil, Canada, India, Libya, Kazakhstan, Russia, and throughout Europe. Kreeft has Dutch and Canadian citizenship and resides in the Netherlands. He writes on a regular basis for Africa Oil + Gas Report and contributes to the Institute of Energy Economics and Financial Analysis (IEEFA).