Kenya To Produce 120,000BOPD at Peak, if $3.4Billion Oilfield Project Goes Ahead 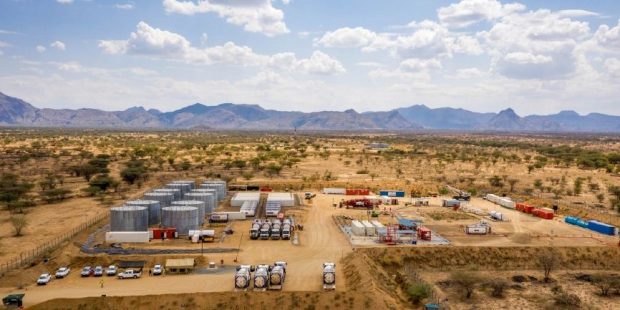 Far from the earlier proposed “foundation stage development” involving a 60,000 to 80,000Barrels of Oil Per Day (BOPD) Central Processing Facility (CPF) and an export pipeline to Lamu, the three companies: Tullow Oil (operator), Africa Oil Corp, and TOTALEnergies, have now informed the Government that Blocks 10BB and 13T licenses can deliver production plateau of 120,000BOPD, with expected gross oil recovery of 585Million barrels of oil (MMBO) over the full life of the field.

This resource position, the partners say, “is supported by external international auditors Gaffney Cline Associates (GCA), who have issued a Competent Persons Report (CPR) and confirmed the life of field resource position of 585MMBO”.

The key changes to the development concept have been driven by:

2. Optimising the number of wells to be drilled with drilling initially at the crest of the fields to achieve First Oil. Changing the producer to injector ratio from 2:1 to 1:1 leading to improved pressure support and higher resources recovered from the reservoir.

3. Adding the Ekales field into the first phase of production. Ekales is geographically straddled between the Twiga and Amosing fields and ongoing technical work has helped mature our understanding.

As such, the first phase will now include the Ngamia, Ekales, Amosing, and Twiga (NEAT) fields and will target 390MMBO of the overall 585MMBO.

4. Optimising the overall development cost with a facility design capacity of 130,000BOPD and an increase to the pipeline size from 18” to 20” to handle the increased flow rates.

Total gross capital expenditure (capex), which covers both the upstream and the pipeline to First Oil, is expected to be c.$3.4Billion.

The increase in capex from the previous design is due to a bigger facility processing capacity, additional wells to be drilled, and larger diameter crude oil export pipeline, which delivers a 30% increase in resources whilst lowering the unit cost to $22/bbl (previously c.$31/bbl).

The revised concept also allows greater flexibility in adding additional fields into production without significant modifications to the project’s infrastructure.