In Ivory Coast, ENI Announces a Potential Discovery of Up to 2Billion Barrels in Place 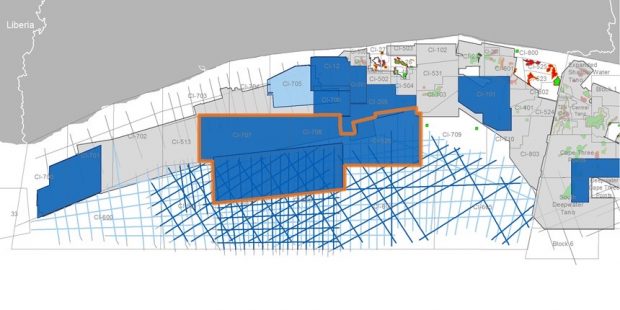 Italian explorer ENI says it has made a major oil discovery in block CI-101 offshore Ivory Coast. The block is operated by ENI with the state hydrocarbon firm Petroci Holding, who holds 90% and 10% respectively in the exploration phase.

The company says the well was drilled in the context of a new play concept in the West African margin. The probe encountered light oil in reservoirs of the Santonian and Cenomanian / Albian ages.

It could be big. ENI is talking about the discovery potential of up to a 2Billion barrels of oil and 2.4Trillion cubic feet of gas in place, but the concept needs to be tested through a comprehensive appraisal programme.

“Baleine-1x discovered light oil (40° API) in two different stratigraphic levels”, the company explains. “An evaluation programme will be carried out to assess the significant upside potential of the overall structure that extends into block CI-802, also operated by ENI with the same Joint-Venture and participating interests in the exploration phase”.

ENI’s geoscientists say that Baleine-1x was located on the basis of a comprehensive analysis of a wide range of three dimensional (3D)seismic data and regional studies in the sedimentary basin in Ivory Coast; the implementation of state-of-the-art technology including intelligent wireline formation testing and fluid sampling proved the presence of light oil-bearing intervals of Santonian and Cenomanian / Albian age. The lower Cenomanian / Albian level shows discrete to good reservoir characteristics and has been successfully tested to production.

“Along with the appraisal programme, ENI and Petroci Holding will also start studies for a fast-track development of the Baleine discovery. The potential of the discovery can be preliminarily estimated at between 1.5 and 2.0Billion barrels of oil in place and between 1.8 and 2.4Trillion cubic feet (TCF) of associated gas.

Baleine-1x is the first exploration well drilled by ENI in the Ivory Coast. Besides block CI-101, ENI owns a participating interest in other four blocks in the Ivorian deep water: CI-205, CI-501, CI-504, and CI-802, all with the same partner Petroci Holding.