Aggressive TGS Kicks Off Another Seismic Survey in Mauritania 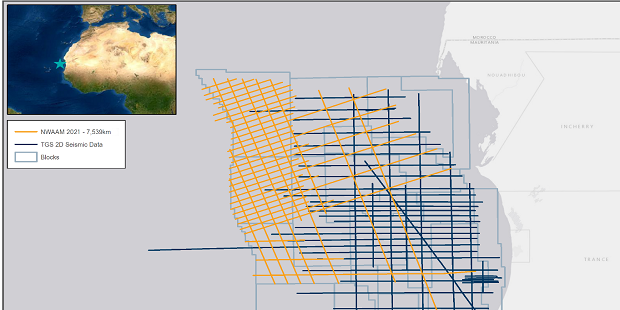 The Norwegian geophysical company, TGS, has announced commencement of a new seismic survey in the MSGBC Basin, offshore Mauritania.

It is a follow up to the North-West Africa Atlantic Margin (NWAAM) two dimensional (2D) seismic acquisition campaign.

The current survey, NWAAM 2021, will comprise 7,500 kilometres of seismic data, with a modern broadband acquisition set-up. The project is being undertaken using the vessel BGP Pioneer

“The survey is designed to illuminate the regional plays in the ultra-deep and deepwater areas with a new azimuth and to provide prospectivity insights of an oil-prone area in relation to recent key wells and the shallow water geology”, TGS says in a release.

TGS has been, perhaps the busiest multi-client seismic survey contractor on the African continent in the last three years. It was the go -to company for the Liberian licensing round, which was launched in 2nd Quarter 2020, because it holds a range of multi-client data across the Harper Basin, the focus of the round, to support the activity.

In Nigeria, between 2019 and 2021, TGS, along with its joint venture partner PetroData, carried out the country’s first regional multi-client Multibeam and Seafloor Sampling (MB&SS) Study, covering an area of approximately 80,000 square kilometres of the offshore Niger Delta and incorporating around 150 cores from the seabed, whose location is based on multibeam backscatter anomalies.

In terms of the ongoing Mauritanian survey, TGS says the project has a 60-day acquisition timeline, with fast-track data available three months after acquisition. The full dataset will be available by Q2 2022.

“Our latest seismic survey offshore Mauritania will provide explorers with the subsurface intelligence needed to assess the hydrocarbon potential of the deep and ultra-deepwater”, TGS says. “We see this project as the natural continuation of our successful NWAAM campaign, one of our flagship projects in Africa”.