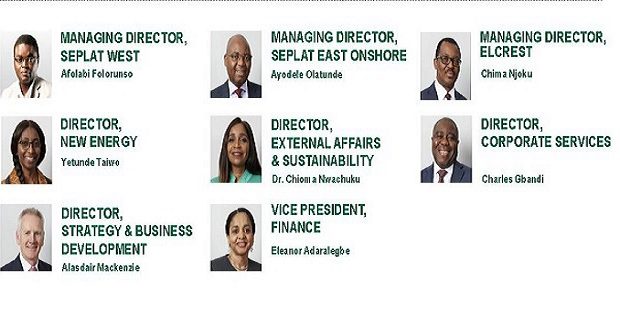 In the one year since he took over the reins of Africa’s largest homegrown E&P company, Brown has devolved his executive powers extensively, converting the General Managers of the regional assets, which form the company’s base business, into Managing Directors, creating an Energy Unit for new business and bolstering the Public Affairs department as a directorate.

In the event, Ayodele Olatunde is promoted from General Manager East, to Managing Director Seplat East Onshore Limited, fully overseeing the Oil Mining Lease (OML) 53 (which hosts the Ohaji South field, the company’s portion of the straddling Assa North /Ohaji South ((ANOH) field, as well as Seplat’s interest in OML 55, which is operated by Belemaoil.

Afolabi Folorunso, who was General Manager West, is now Managing Director Seplat West Ltd, with a portfolio that includes OMLs 4, 38 and 41, the acreages upon which the company was created in 2010. Seplat West also includes Seplat’s 40% interest in Pillar Oil operated Umuseti field, in Oil Prospecting Lease (OPL) 283.

Chima Njoku and Okechukwu Mba have been Managing Directors of subsidiary companies before the new organizational structure. Njoku had been MD/CEO, since March 2020, of Elcrest Exploration & Production, a company which Seplat acquired about two years ago. Elcrest holds 45% in OML 40 and is the technical and financing partner of the Ubima marginal field in OML 17. Last February, Mba took over as managing director of the ANOH Gas Processing Company (AGPC) from Yetunde Taiwo, who was moved over to set up a new business unit.

Company spokesperson Chioma Nwachuku transforms from General Manager, Public Affairs, to Director of External Affairs and Sustainability, which in effect means that she is running a directorate.

All of these officers, though, are on the second level of the organogram, below a four man committee which includes Roger Brown himself as CEO, Emeka Onwuka as Chief Financial Officer (CFO), Effiong Okon, Operations Director and Gary Thomson, Technical Director. Brown, Onwuka and Okon  are all on the company’s board, as executive directors.

Mackenzie joined Seplat Energy from Tullow Oil, where he was Group Head of Commercial, Planning and Tax. But it was his tenure as Tullow’s Commercial & M&A Manager which Mr. Brown found most fitting to his strategy. Mackenzie, who operates out of London, is in charge of the new ventues that Seplat is exploring the most ambitious of which is discussion to buy into four acreages being divested by an oil major

All of these leaders have had positions of increasing responsibility over the last 10 years.

Olatunde had been Seplat’s GM, Eastern Assets Operations since 2014, when he joined the company from Conoil Producing, where he was GM, Exploration & Production, a position he took after he was promoted from Group Head, Geosciences. Folorunso was promoted from Principal Production Technologist in May 2014 and he has moved up rapidly, becoming Production Operations Manager in May 2016, and GM Corporate Prod. Operations a month after, after which he was made GM Western Asset-1 in January 2020, taking over from Njoku, who become the first Seplat appointed CEO of Elcrest after the acquisition.

But it is through Ms. Taiwo’s portfolio that Seplat Energy wants to test the future. The New Energy unit involves the increase of gas products to be monetised in the form of LPG, CNG and other gas derivatives, with opportunity framing in the renewable energy space, all utilisable  in the local market.  Taiwo worked for BG as Economics manager after 15 years as reservoir engineer, then planning advisor at Chevron, before she showed up at Seplat in May 2011 as head of planning and economics. She joined NNPC, the state hydrocarbon company, in 2013, as General Manager, Planning at NAPIMS, the Investment arm. She was appointed head of Gas Business when she returned to Seplat in 2015 and then promoted MD, AGPC.