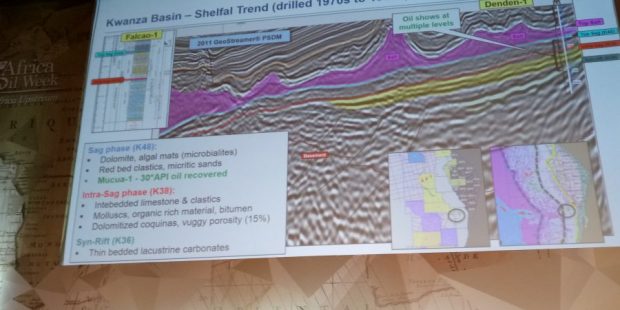 Oil production from the country’s mature oil fields continues to decline steadily from a peak production of 2Million barrels of oil per day in 2008 to the current 1.13Million barrels per day.  But it is too early to write off Angola as an important oil producer in the global oil industry. One needs to be reminded that Angola remains Africa’s second-largest oil producer after Nigeria.

In the past few weeks, events have happened which point to a turnaround in Angola’s oil industry.

1.) Nine blocks in the onshore Lower Congo and Kwanza Basins were awarded to various small international and local Angolan oil companies. This is positive news. However, the existing subsurface geological and seismic data indicate that if exploration is successful, the new oil fields will likely be small. Future possible oil production from those areas likely will not materially impact Angola’s oil production. However, the activity there could build a reasonably sized onshore oil industry and create jobs which would be very important for Angola’s struggling economy.

2.) TOTALEnergies announced they will commence this month the drilling of an exploration well on ultra-deepwater Block 48 in a world record-breaking water depth of 3,628 m (11,900 ft). This record was previously held by TOTALEnergies in an exploration well drilled in 2016 in 3,400 m (11,155 ft) water depth off Uruguay. A possible oil or gas discovery in Block 48, which is located in the Lower Congo Basin, will open up a wide range of similar prospects in this basin’s ultradeep waters. Accordingly, this well will be one of the world’s most high-profile wells to be drilled this year.

3.) This month, TOTALEnergies announced that following their recent successful appraisal well drilled in the Golfinho oil discovery, they will install a floating production project in the deepwater Kwanza Basin to produce oil from the Cameia and Golfinho oil fields. The FPSO will go online in 2026 and produce 100,000 barrels of oil per day. The importance of this announcement is under-appreciated by most oil industry observers and needs to be further explained.

The offshore Kwanza Basin has been explored for over a half-century, beginning in 1968 with the drilling in shallow water Block 7. Neither a drop of oil nor a cubic metre of gas has been produced in the basin since that time. However, beginning in 2011, Houston-based Cobalt International Energy made seven oil, gas, and condensate discoveries in Cretaceous-age pre-salt sediments. Due to a wide range of various issues, Cobalt went bankrupt in 2017 and its discoveries remained undeveloped. Thereafter, TOTALEnergies was awarded operatorship of the legacy Cobalt blocks. The French major re-evaluated the discoveries and remaining prospects and completed the successful Golfinho appraisal well. The Cameia – Golfinho production project will create an activity hub in this part of the Kwanza Basin which will result in a further reappraisal of the other Cobalt discoveries, prospects, and leads which could lead to additional oil production projects.

At times, oil and gas explorers need to take a historical view of the exploration in any sedimentary basin. In the deepwater Kwanza Basin, in 2011 a huge drilling campaign commenced which was focused on exploring for oil in the pre-salt sediments. The objective was to try to duplicate in the Kwanza Basin the major oil discoveries made in Brazil’s pre-salt, including the giant Tupi (now Lula) and Libra oil discoveries. The operators included BP, TOTALEnergies, Repsol, ENI, Statoil, Maersk, Petrobras, and Cobalt. The results were very disappointing. Oil discoveries by Cobalt and Maersk were non-commercial. The campaign also resulted in natural gas discoveries which were relinquished by the oil companies since at that time they had no rights to the gas. For example, as unbelievable as it may now sound, ConocoPhillips drilled the Kamoxi-1 exploration well on Block 37 and walked away from a 160 m gas column in the pre-salt without testing it.

Since that time, Angola revamped its oil and gas legislation so that the companies are also entitled to any gas they discover. You can be sure that a number of companies have now taken a hard look at the possible appraisal of ConocoPhillips Kamoxi gas discovery in view of the high current and projected global gas prices. Accordingly, in my view, the deepwater Kwanza Basin could eventually host a floating Liquified Natural Gas (LNG) project if the threshold gas reserves for a commercial project are established.

From a geologist’s point of view, the Kwanza Basin’s gas potential is promising. From an environmental viewpoint, such a project is positive since gas is the least carbon-emitting of the hydrocarbons. Most forecasts are that gas will be the critical “bridging fuel” in the rapidly increasing energy transition. From an economic viewpoint, such an LNG project could be commercially positive since gas prices continue to escalate and the need for gas keeps ramping up worldwide.

In conclusion, there is lots of life left in the Angolan oil patch and the turn-around has just begun.

Tako Koning is a Calgary, Canada-based energy consultant who worked in Angola for twenty years from 1995 to 2015. He is a graduate of the University of Alberta with a B.Sc. in geology and from the University of Calgary with a B.A. in Economics. He is a registered professional geologist with the Association of Professional Engineers and Geoscientists of Alberta (APEGA). In Angola, Tako was employed mainly by Texaco but also later by Tullow Oil and the American/British consulting firm of Gaffney, Cline, & Associates.  He has been on the International Advisory Board of Africa Oil + Gas Report since its inception in 2001. In 1994, Tako was awarded Honorary Life Membership by the Nigerian Association of Petroleum Explorationists (NAPE) for his work with Nigeria’s university students and also for his assistance to NAPE.