ExxonMobil’s Next Move: Is there a Plan B? 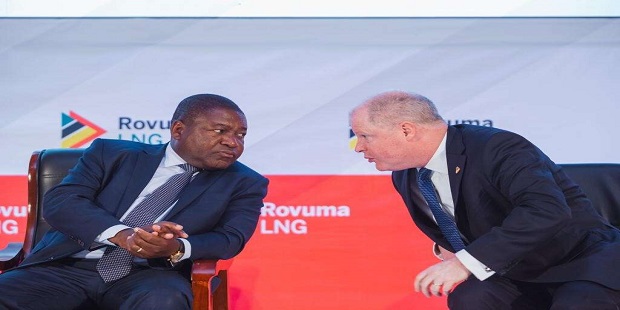 Will ExxonMobil’s Board decide to exit from its Rovuma LNG project in Mozambique? Gas reserves are estimated at 80Trillion Cubic Feet (80Tcf) and the cost for developing the field are estimated at more than $30Billion. The mere fact that such a discussion is taking place leaves pundits scratching their heads.

Surely in the midst of the energy transition such a project with its abundance of natural gas is the symbol of moving towards a cleaner fuel.

ExxonMobil is in a state of turbulence. Once seen as the oil and gas industry leader, the Dallas headquartered supermajor is in uncharted waters. Its biggest challenges are legal, not the search for oil and gas: ExxonMobil’s management has been forced to accept three new board members, nominated by Engine Number 1, a small, but very influential investor; and an environmental court challenge which potentially could derail its Deepwater Guyana projects.  Surely the court decision in the Netherlands ordering Shell to cut by 2030 its CO2 emissions by 45%, compared to 2019 levels, is a decision being followed closely by the courts in Guyana and the boardroom of ExxonMobil. Afterall, ExxonMobil’s upstream activities in the Netherlands and the UK are joint-ventured with Shell.

ExxonMobil has written down between $17–$20Billion in impairment charges, and is capping capital spending at $25Billion a year through 2025, a $10Billion reduction from pre-pandemic levels. Its market capitalization now hovers at $250Billion; in October 2020 ExxonMobil’s  market cap plunged to $140Billion.

Clark Williams-Derry and Tom Sanzillo, IEEFA(Institute for Energy Economics and Financial Analysis) recently reported that ExxonMobil has since 2013 invested $61.5Billion on US upstream capital projects, only to report $5.3Billion in cumulative losses(see below). 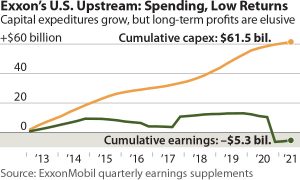 To meet the green challenge ExxonMobil has unveiled a plan to build one of the world’s largest carbon capture and storage (CCS) projects along the Houston Ship Channel in Texas. The proposed project would cost $100Billion and would capture and store 100Million metric tons of CO2 per year. The emissions saved would be equivalent to removing 1 in every 12 cars on US roads, the company says. ExxonMobil is proposing to build infrastructure to capture its own CO2 emissions, as well as those from power plants, oil refineries, and chemical plants in the Houston area.

For the project to be economically viable, it would need major public funding and the introduction of a price on carbon in the US. ExxonMobil says the project could be fully operational by 2040.

Yet public reactions are at best muted and at worst cynical. Carbon Market Watch sees CCS “as a lengthy distraction from the debate about greenhouse gas pollution from fossil fuels and getting emissions down at source”.

CCS can perhaps be seen as a partial measure to reduce a company’s CO2 footprint; however, only within the structured framework of a green energy roadmap. Not as a smoke screen in a continued broken hydrocarbon narrative.

What ExxonMobil fails to understand is that since the Paris Climate Agreement of December 2015 the industry landscape has changed drastically. Shareholders are demanding an energy transition strategy in which key renewables play a key role and CO2 emissions levels are drastically reduced.

ExxonMobil’s reaction has been– less spending on hydrocarbons with the hope for a better day. No renewable vision. A company in retreat. Certainly a project such as Rovuma with potential gas reserves of some 80Tcf should be the centre of any long-term energy transition  strategy, given the importance of natural gas in the transition phase. Yet because of its religious belief in only exploring for hydrocarbons it has painted itself in a corner.

A contrasting vision is that of TOTALEnergies. In the summer of 2020 French oil and gas giant TOTALEnergies  announced a $7Billion impairment charge for two Canadian oil sands projects. This might have seemed like an innocuous move, merely an acknowledgement that the projects hadn’t worked out as planned.

Yet it opened a Pandora’s box that could change the way the industry thinks about its core business model—and point the way towards a new path to financial success in the energy sector.

While it wrote off some weak assets, it did something else: TOTALEnergies began to sketch a blueprint for how to transition an oil company into an energy company.

Patrick Pouyanné, TOTALEnergies’ chairman and chief executive, now says that by 2030 the company “will grow by one-third, roughly from 3Million BOE/D (Barrels of Oil Equivalent per Day) to 4Million BOE/D, half from LNG, half from electricity, mainly from renewables.” This was the first time that any major energy company  translated its renewable energy portolio into barrels of oil equivalent. So, at the same time that the company has slashed “proved” oil and gas from its books, it added renewable power as a new form of reserves.

Each of the oil and gas majors spilled red ink in 2020, and most took significant write-downs. But TOTALEnergies’ tar sands impairments were different. The company wrote off “proved reserves,” or oil and gas that the company had previously deemed all-but-certain to be produced.

Proved reserves long stood as the Holy-of-Holies for the oil industry’s finances—the key indicator of whether a company was prepared for the future. For decades, investors equated proved reserves with wealth and a harbinger of long-term profits.

Because reserves were so important, the Reserve Replacement Ratio, or RRR—the share of a company’s production that it replaced each year with new reserves—became a bellwether for oil company performance. The RRR metric was adopted by both the Society of Petroleum Engineers and the U.S. Securities and Exchange Commission. An annual RRR of 100% became the norm.

But TOTALEnergies’ write-off showed that even “proved” reserves are no sure thing, and that adding reserves doesn’t necessarily mean adding value. The implications are devastating, upending the oil industry’s entire reserve classification system, as well as decades of financial analysis.

How did TOTALEnergies reach the conclusion that “proved” reserves had no economic value? Simply put, reserves are only reserves if they’re profitable. The prices paid by customers must exceed the cost of production. Given current forecasts that prices would remain lower for longer, TOTALEnergies’ financial team decided those resources could never be developed at a profit.

A key to TOTALEnergies success is its willingness to devote capital to projects at an early stage. Its renewable investments include:

Taking on renewables has enabled TOTALEnergies to broaden its portfolio and take on additional risks. Perhaps a key reason why TOTALEnergies in 2022  will possibly continue with its Mozambique LNG project and ExxonMobil will be probably exiting the country.

-Gerard Kreeft, BA (Calvin University, Grand Rapids, USA) and MA (Carleton University, Ottawa, Canada), Energy Transition Adviser, was founder and owner of EnergyWise.  He has managed and implemented energy conferences, seminars and university master classes in Alaska, Angola, Brazil, Canada, India, Libya, Kazakhstan, Russia and throughout Europe.  Kreeft has Dutch and Canadian citizenship and resides in the Netherlands.  He writes on a regular basis for Africa Oil + Gas Report and contributes to the Institute Energy Economics and Financial Analysis (IEEFA).