How Hydrogen Will Challenge and Change the LNG Energy Value Chain 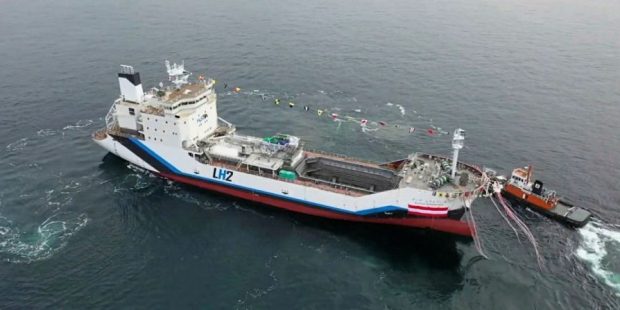 For some 50 years, LNG tankers have become a common sight between LNG producers-primarily Qatar, Indonesia, USA, Australia, and Malaysia-and LNG consumers such as China, Japan, and South Korea. At the end of 2020, the global liquified natural gas (LNG) tanker fleet encompassed a total of 642 vessels.

In the coming decade, the LNG fleet could get competition from hydrogen. Kawasaki Heavy Industries Ltd., a pioneer in transporting liquified natural gas (LNG), has now developed the world’s first tanker for liquified hydrogen.

The new technology, along with tanks the company developed to store liquified hydrogen as rocket fuel, is expected to be used for the Japanese government’s goal of having hydrogen and ammonia serve as the fuel for 10% of electric power generation by 2050. It is part of Japan’s overall target of achieving net-zero emissions of greenhouse gases in that year.

Kawasaki has for a number of years implemented extensive studies on how to convert cheap brown coal(lignite) to hydrogen. The lignite is mined in Australia, steamed and then the hydrogen is liquified. In the spring of 2022 Kawasaki plans to transport the first load of liquified hydrogen from Australia.

That process emits carbon dioxide, though the plan is to sequester the CO2 in order to keep the emissions at virtually zero. Yet sequestration is a large challenge: developing such sub-surface reservoirs to inject CO2 could take 5 or more years, drilling injection wells, building compressors, installing pipelines, and other infrastructural issues.

According to  Motohiko Nishimura, Deputy General Manager of Kawasaki’s Hydrogen Strategy Division “There will be a need to quickly promote greater use of such vessels”.

Kawasaki has already installed equipment at Kobe Port to unload liquified hydrogen from the tanker as well as tanks on land. Currently, tests are being conducted in conjunction with J-Power and Iwatani Corp.

Under the Japanese government’s plan for 2050, the total volume of liquified hydrogen imports, including for fuel for motor vehicles, is estimated at 300,000 tons per year by 2030 and increase to 20 million tons per year by 2050.

Where will the hydrogen come from?

A major hydrogen producer could well be Africa. For example, the Hyphen Hydrogen Project in Namibia anticipates investing $9.4Billion over a period of 9 years.

The project sponsors aim to produce 5GW of power by 2030, and 3GW of electrolysis capacity. A production of 300,000 metric tons of green hydrogen per year is anticipated once the project ramps up.

According to the Government of Namibia, a large focus would be on exporting hydrogen to Europe and selling some of the output to neighboring countries to “take advantage of the vision that our leaders have for the African Continental Free Trade Area”.

“A lot of our neighbors have been contacting us–Angola, South Africa, and Botswana–to ask how this project can be integrated into the Southern African Power Pool”.

According to the project, officials green hydrogen produced in Namibia would be cost-competitive with highly polluting grey hydrogen made from fossil fuels, at €1.50-2.00 ($1.73-2.30) per kilogram. Hyphen won a government-hosted competitive tender to build the project, but will not officially be given the rights until it concludes a feasibility study and signs a construction contract with the government.

“The first phase, which is expected to enter production in 2026, will see the creation of 2GW of renewable electricity generation capacity to produce green hydrogen for conversion into green ammonia, at an estimated capital cost of $4.4billion,” said Hyphen CEO Marco Raffinetti.

“The Tsau Khaeb national park is among the top five locations in the world for low-cost hydrogen production, benefiting from a combination of co-located onshore wind and solar resources near the sea and land export routes to market.”

Earlier Germany signed the €40m partnership deal with Namibia as part of a bid to secure supplies of green hydrogen. Germany believes it is cheaper to import than to produce green hydrogen, particularly due to the lack of space in Germany to build the giga-scale projects required to reach the necessary scale of H2 production.

To date, a Letter of Intent has been signed between the Governments of the Netherlands and Namibia to collaborate in the field of energy, in particular related to green hydrogen. The goal is to stimulate the development of export-import hydrogen supply chains between both countries.

While details of hydrogen production have been revealed there is no detailed information available about how hydrogen will be transported. No doubt there is a need to bring Kawasaki and the project sponsors of Hyphen Hydrogen to the bargaining table.

A hydrogen sub-industry, together with the development of a hydrogen fleet is very much like the early development of the LNG industry. Thus it is certainly a disruptive technology in the making. This will raise the eyebrows of the international LNG players, who are preparing for a long-term natural gas era. Their sunshine could be short-lived.

Very likely hydrogen production and transportation will become the new buzzwords of the changing LNG energy value chain. A value chain in which Africa could play a key strategic role if African countries proactively try to develop projects such as the Hyphen Energy green hydrogen project in Namibia.

In an analysis of the developing hydrogen market in Asia-Pacific Wood Mackenzie stated:

“Successfully managing supply chain costs will determine which countries and projects emerge as winners in the hydrogen export market, but it will be suppliers with access to the lowest cost renewables that will really stand out. For Australia and others, this should be a case of making hydrogen while the sun shines.”

2)With the projected global focus on hydrogen production, a parallel focus is now on how to dispose of the CO2 which is generated by projects such as Australia’s proposed lignite-to-hydrogen project. Geologists, geophysicists, and reservoir engineers are now exploring worldwide for subsurface sites where huge volumes of CO2 can be safely and permanently stored.

Perhaps the Japanese will explore the viability of using wind and solar power, both in abundance in Australia, to enhance their project.

Gerard Kreeft, BA (Calvin University, Grand Rapids, USA) and MA (Carleton University, Ottawa, Canada), Energy Transition Adviser, was the founder and owner of EnergyWise. He has managed and implemented energy conferences, seminars, and university master classes in Alaska, Angola, Brazil, Canada, India, Libya, Kazakhstan, Russia, and throughout Europe.  Kreeft has Dutch and Canadian citizenship and resides in the Netherlands. He writes on a regular basis for Africa Oil + Gas Report and contributes to the Institute of Energy Economics and Financial Analysis (IEEFA). His book entitled The 10 Commandments of the Energy Transition, is scheduled for publication in early 2022.

« ENI to Build a 50MW Solar Plant in Angola’s Namibe Province
Predictions 2022: How Africa Will Become a Hotbed of Consolidations, Acquisitions and Mergers »