Shale Drilling on the Rebound in 2022, with Spending Cruising to $100Billion 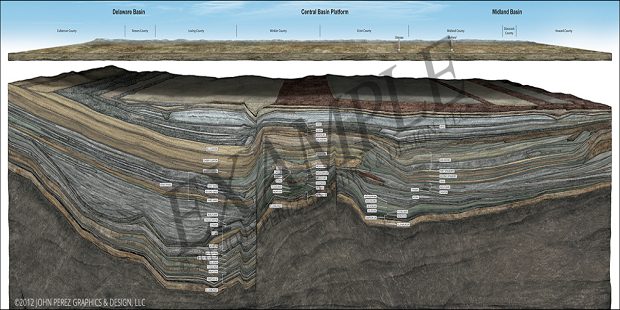 US shale expenditure is projected to surge 19.4% next year, leaping from an expected $69.8Billion in 2021 to $83.4Billion, the highest level since the onset of the Covid-19 pandemic and signaling the industry’s emergence from a prolonged period of uncertainty and volatility, according to a Rystad Energy report.

As the impact of the pandemic on demand and activity levels out, US Land players are poised to loosen their purse strings. As the Omicron variant of the novel coronavirus tightens travel restrictions and raises concerns over a potential industry slowdown, some hesitancy in spending could yet materialize.

Of the expected year-on-year increase, service price inflation alone is set to add $9.2Billion, with increased activity chipping in $8.6Billion. These increases will be partially offset by $4.2Billion in savings from efficiency gains. Efficiency gains are expected to be driven predominantly by further adoption of simul-fracs. Despite the sizeable annual spending growth, the 2022 total will still end up well below the level forecast for 2022 before the pandemic took hold.

“Oil and gas activity and upstream spending in US Land has been exposed to significant volatility in the last two years. Aggressive strategies from private operators in the US shale patch have driven spending this year, but we anticipate significant growth in 2022 from public and private operators alike,” says Artem Abramov, head of shale research at Rystad Energy.

In November 2019, before the market downturn caused by Covid-19, Rystad Energy forecast total US shale spending for 2020 would be $104.9Billion, with $109.7Billion and $119.8Billion per annum estimated for 2021 and 2022, respectively. The estimate for 2020 was taken down sharply in that year’s second quarter to $60.4Billion following the unprecedented oil price crash and a domestic storage crisis. While modest adjustments to this estimate were observed in the second half of 2020 and the first half of this year, the final numbers for all public producers and final estimates for private exploration and production (E&P) players had only a marginal net impact on that original estimate. Currently, the number for 2020 still stands at $60Billion. 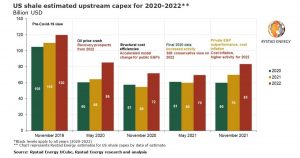 Public independents largely maintained their 2021 US shale budgets compared with 2020 on a full-year basis, with a modest increase in the weighted-average well activity index (two-thirds of completion count and one-third of drilled well count). Somewhat higher activity was offset by structural efficiency gains and lower service costs behind actual drilling and completion (D&C) operations. While the latter might sound counterintuitive from the perspective of significant spot rate inflation in most service segments throughout 2021, it should be noted that there was an opposite trend throughout 2020, which allowed large independents to lock in cheaper service rates in early 2021 compared to what was behind their D&C spending in 2020.

Meanwhile, private operators, which moved aggressively throughout 2021, warmed up spot service rates and have already felt the impact of cost inflation this year. As a result of this private E&P activity uptick, total US shale capital expenditure increased by around 16% in 2021 compared with 2020.

How the regions stack up

At the regional level, spending in the Permian and Haynesville plays stayed resilient during 2020’s downturn, seeing a faster structural increase in activity this year. As a result, full-year upstream spending in these regions has increased by between 23% and 24% so far this year, outperforming the national average growth rate. The Niobrara saw an even steeper increase in spending in 2021 on a percentage basis, albeit starting from a particularly low base after the massive collapse last year.

Appalachia and the Eagle Ford, on the other hand, have experienced only minor growth in 2021, with spending rising between 3% and 6% compared with last year. While the Eagle Ford has seen a healthy recovery in rig count during 2021, its full-year spending growth numbers were dragged down by low drilled but uncompleted (DUC) wells to completion activity, especially when compared to the Permian, and inflated 2020 spending amid robust activity in the first quarter of 2020. Spending in the Bakken and Anadarko regions in 2021 has declined by between 7% and 14% from last year.

Looking ahead to 2022, the Eagle Ford, Niobrara and Anadarko regions are anticipated to beat nationwide average spending growth due to the rig activity expansion observed in recent months, which provides some momentum to the increase in the running rate of frac activity in 2022. The Bakken is forecast to have 19% spending growth next year, matching the national average growth rate, while the Permian is set to grow by 17%, slightly less than the national average as other basins are catching up. On the gas side, we anticipate a 15% increase in spending from Appalachia and an around 10% increase in the Haynesville. While the full-year growth rate is seen higher in Appalachia, this does not really suggest a stronger increase in the running rate of frac activity in the northeast region, where supply remains constrained by the takeaway capacity situation.