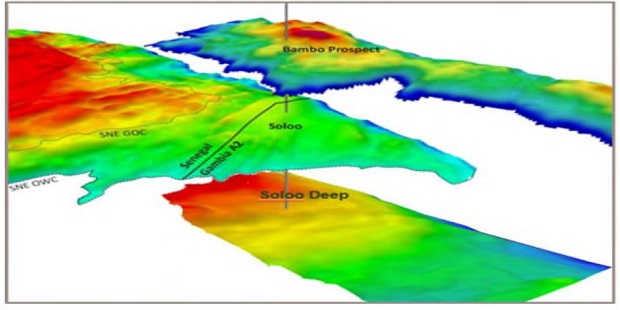 Drilling operations were temporarily halted at 3,216 metres Measured Depth below rotary table after significant fluid losses were experienced in Bambo-1, currently being drilled offshore Gambia by the Australian independent FAR.

“These fluid losses were stabilised in accordance with standard offshore operating procedures, and FAR is now planning to plug and side-track the well to continue drilling to the planned total depth (PTD)”, the company says in a release. Prior to side-tracking and provided hole conditions remain stable, FAR is undertaking a wireline logging programme in the current well bore.

The probe is already close to the ptd, which is 3450metres Measured depth below rotary table.

FAR says that oil indications have been detected in roc cuttings and hydrocarbons have been interpreted across several intervals in the well from LWD (logging whilst drilling) data, but “further wireline logging needs to be completed to confirm the finding”.

The operator is concerned that “the addition of the side-track programme has extended the period of operations which is now expected to be completed by the end of December 2021”.

The well has been designated a “tight hole” by FAR and JV partner Petronas and as such, no information related to depth or formation is likely to be provided during the drilling beyond what is required to meet ASX continuous disclosure obligations.

Market participants should exercise care before transacting in FAR shares until such time as FAR, as Operator of the Joint Venture, makes formal ASX disclosures regarding well results.