NNPC’s Grab and Grab Will Demarket the Nigerian Hydrocarbon Opportunity 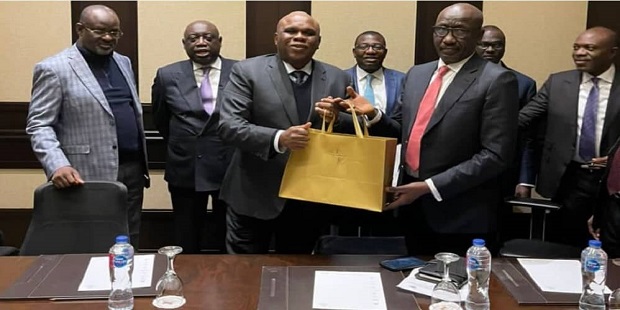 By The Editorial Board of Africa Oil+Gas Report

In the week of January 24, 2022, speculations emerged that NNPC had exercised its right of pre-emption of the ongoing divestment of ExxonMobil’s Joint Venture assets, located in the south east shallow offshore Nigeria.

On the heels of those speculations came the news that the state hydrocarbon firm had received a $5Billion corporate finance commitment from the African Export Import (Afrexim) Bank to fund major investments in the country’s Upstream sector.

If NNPC’s plans for the money includes pre-empting the sale of ExxonMobil’s and /or Shell’s JV assets to other parties, then it would be deeply concerning.

Two sentences in the press release announcing the Afreximbank transaction give us pause. One allows that NNPC would be raising between $3.5Billion and $5Billion as corporate finance to fund major upstream investments. The other avers that the state hydrocarbon firm “plans to take over ownership from non-investing partner through acquisition of pre-emption rights in the sample Joint Venture”.

What ‘sample’ Joint Venture? Do these statements “confirm” the speculations that NNPC was exercising its right of pre-emption on the ongoing divestment of ExxonMobil JV assets? If they do, we should all be worried by this proclivity of NNPC to grab and grab. For one, the Nigerian state is in dire need of investors taking interest in any sector of its economy. The hydrocarbon opportunity is still one of the main drawing cards to the Nigerian concert party. In the ExxonMobil divestment process, the preferred bidder is the dual listed Seplat Energy, Africa’s largest homegrown independent, which ran with Trident Energy, a London based explorer, backed with funding from Warburg Pincus, a leading global growth investor. The reserved bidder is a consortium involving a new Nigerian independent and a London listed explorer Cairn Energy, who made the first commercial oil find in Senegal and has invested over $400Million in the last 12 months acquiring Shell’s brownfield assets in Egypt. What this means is that the divestment from majors attracts the cream of global investors.

NNPC just concluded pre-empting the sale of Chevron operated Oil Mining Leases (OMLs) 86 and 88 to Conoil Producing. If it swoops on ExxonMobil, it will draw a pattern. It would mean that it would do the same for Shell. And what does that mean? Nationalisation?

Soon, investors around the world will mark Nigeria as a no-go area. For how do you spend over $4Million in a bidding process only to get to a pre-emption sign at the end?

After the bungled Marginal Field Bid Round, an exercise that turned out to be the least transparent licence offering anywhere on the continent, the last thing Nigeria needs is to be seen as a jurisdiction in which a company, from anywhere, is not welcome to bid for asset.

What’s particularly noteworthy about its penchant for grabbing is that NNPC is not using them to build any capacity.

It would not manage the assets, so any excuse about “this being taken over in the interest of the state” is untrue. In the last three years, it has implemented Finance and Technical Service Agreements (FTSAs), with companies that it chooses to work the assets. Its choice of “partners” for the assets it grabs points more to cronyism than the quest to help build an industrial economy. So NNPC takes an asset that should have gone to Conoil, a proven operator of oilfields in the last 30 years, and turns around to “sell” the asset to MRS, a far downstream player. This time it plans to, if the speculations are confirmed, snatch victory from the jaws of Seplat, a 12 year old technically honed operator with 80,000BOPD operated production capacity and then “sell” it, through an  FTSA arrangement, to a company that participated in the ExxonMobil bid but lost out?

And who says we shouldn’t challenge these pre-emptions?

Why are people so unwilling to challenge these matters in court?

One recurring argument in the statement on the Afreximbank funding commitment was that NNPC was seeking to take advantage of the opportunity provided by the new law: Petroleum Industry Act. Our question is: What more does it want? As we’ve noted here in an earlier piece, NNPC is in joint venture in acreages that produce 45% of the country’s crude, and will continue to be. It is also the Concessionaire in the Production Sharing Contract (PSC) arrangements, which deliver over 39% of the crude, according to the 2018 Oil and Gas Industry annual report by the Nigerian Upstream Petroleum Regulatory Commission (NUPRC).

And there is the matter of NPDC, the operating subsidiary of NNPC, which has been gifted joint venture participation in 10 Oil Mining Leases (OMLs), all of them producing.

In 2019 alone, the Nigerian Government added more to the cart: It approved the transfer of OMLs 11, 24 and 98, including the operatorship of OML 116, from Federation’s interest (NNPC) to NPDC.

So, what does it want: to take over the entire concession map?