ReconAfrica’s Ready For a 2022 Multi-Drilling Campaign, in Five Sub Basins, in Namibia’s Kavango 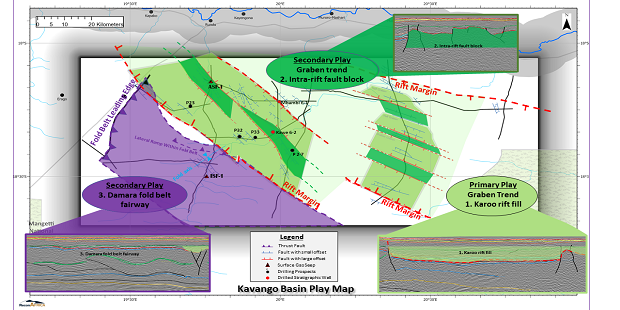 Canadian minnow, ReconAfrica, has initially identified five drillable prospects (including sidetracking of the 6-2 well) and eighteen leads in the first of five sub-basins, in the 8.5Million acre-sized Kavango basin.

The company integrated the two dimensional (2D) seismic data it acquired, with the results of the first two stratigraphic test wells it drilled in the basin, “and established a significant rift basin similar to the other major petroleum provinces/rift basins including onshore Africa, and areas of the North Sea”.
The initial exploration and development is being conducted in the first of five sub-basins, it says.

« TOTAL Announces a Significant Discovery in Namibia, Unlike Shell
Nigerian Rig Activity Higher in March 2022 but Is Almost Monopolised by One Company »