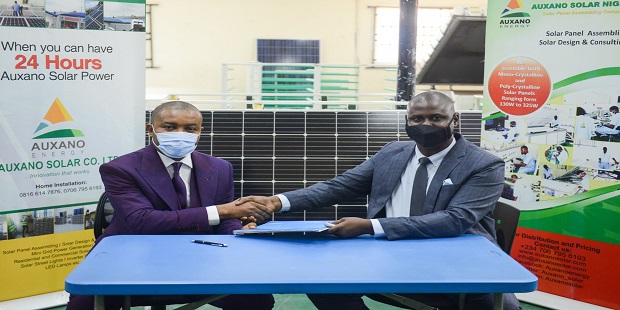 There is not a single wind or solar energy plant of higher than 15MW that is installed in the country.

But a poorly electrified economy worth over $400Billion of Gross Domestic Product with 200Million people living on close to 1Million square kilometres of land and water masses should have absorptive capacity large enough for thousands of enterprises supplying off grid power to thrive, right?

The renewable energy market potential is huge in the country, with the suboptimal grid situation providing opportunity for innovative electricity solutions. Nigerian (mostly) solar power market is taking off from a low base and while the space is still slowly evolving, some players are proving noteworthy.

Because we are so keen on the growth of the industrial economy, we start here at Solar Panel Assembly.

The closer a company is to being called a manufacturing enterprise, the higher it is on our consciousness

Auxano Solar, founded in 2014, is the first privately-owned solar PV assembler of solar systems in Nigeria. In 2020, it signed a $1.5Million expansion deal with All On, an investment company created by Shell, the European hydrocarbon major. The company has an installed capacity of 10MW and intends to increase its capacity to 100MW by 2022.

Greenvillage Electricity (GVE), is a widely referenced firm in the supply of mini-grids, To some, it is the biggest supplier in the country. Founded in 2009, it claims a cumulative installed capacity of 4.54MWp with 6,35GWhrs energy generated till date. It launched its flagship project, a 6kW solar mini-grid in Ebgeke, Rivers State in 2013. In 2019, the company signed a tripartite agreement with the Abuja Electricity Distribution Company Plc (AEDC) and Wuse Market Association, to develop a 1MW PV Solar Hybrid system for Wuse Market, Abuja.  GVE says it has installed about 13 mini-grid projects across the country.By 2022, GVE plans to have installed 20MW of solar power to supply electricity to over 500 communities.

Husk Power Systems was founded in the United States, but heavily Indian owned. It’s a mini-grid developer with offices in Nigeria, Tanzania, USA as well as its home country. The company serves the rural energy economy, with mini-grids at the centre of the company’s business model. It serves both completely rural off-grid areas, which have in the past only been able to use diesel generation to power their businesses and livelihoods, as well as weak grid areas where the main grid (distribution companies or power utilities often referred to as “Discoms” in India, and “Discos” in Nigeria) provide unreliable and poor quality connections, Husk launched its first six mini-grids in Nigeria in November 2021, and is looking to have 100 operational within two years..Husk Power has raised around $40Million in equity from investors. In 2018, it raised a Series C totaling $20Million[5] from Shell Technology Ventures, Swedfund International and Engie Rassembleurs d’Energies, with FMO coming in later with an additional $5Million. Other investors have included The Rockefeller Foundation, Acumen, US International Development Finance Corp. and First Solar.

PowerGen-Formed by Ameicans and headquartered in Nairobi, Kenya, has contributed to mitigating Nigeria’s universal electrification challenges by deploying seven local solar networks in the African country. Work is going on to quadruple the number of networks to 28 systems with a total generation capacity of 2.1 MW and an average figure of around 70 kW per set-up, and with around 4.5 MWh of total battery storage at a typical mini-network volume of around 160 kWh. The project is funded by equity investors who will recoup their money when all 28 systems are sold to CrossBoundary Energy Access.

Havenhill Synergy was established in 2010. In 2017, it commissioned a 20kW Solar Mini-Grid in Kigbe Community, Abuja. It followed up with a 100kWp solar hybrid mini-grid in Budo-Are Community, Itesiwaju Local Government Area, Oyo State in 2020. It has received funding from the U.S Trade and Development Agency (USTDA) and United States African Development Foundation (USADF). The company has also secured a $4.6Million debt funding from Chapel Hill Denham’s Nigeria Infrastructure Debt Fund (NIDF), an infrastructure debt fund in Nigeria and Africa, for the construction of 22 mini-grids being developed by Havenhill Synergy Limited under the Nigeria Electrification Project (NEP), according to Havenhill Synergy Limited.

Beebeejump comes highy recommended from one of Africa Oil+Gas Report’s more esteemed energy analysts.  It claims a sales and after-sales team of more than 200 in its Lagos headquarters alone. Beebeejump says it “not only has the world’s top solar battery digital control, light power generation, and other areas of technical experts for research and development but also the industry’s experienced product team with more user-friendly products and services”. The company’s core competency is in power products used in homes, farms, and corporate businesses. She provides a range of solar power products such as DC power solutions, AC/DC power solutions

Arnergy, founded in 2014, says it has an installed capacity of over 3MW and a storage capacity of over 9MWh.  In 2019, the company raised $9Million through an investment drive championed by Breakthrough Energy Solutions with support from All On, ElectriFi (EDFI Management Company), and Norwegian Investment Fund for Developing Countries (Norfund), in its Series A round of funding. This funding would deploy about 14MW of PV solar panels and 35MWh storage, with an annual capacity of 13,500MWh/y from 2019 to 2022. In the fourth quarter of 2020, the Federal Government of Nigeria, through the Rural Electrification Agency (REA), signed an official grant agreement with seven firms including Arnergy Solar. Under the Nigerian Electrification Project (NEP), the Output Based Fund (OBF) grant would deploy stand-alone Solar Home Systems (SHS) to Nigerian Small and Medium Enterprises in rural communities. In 2021, the company was listed by Bill Gates and his Friends among the top five leading Cleantech firms changing the narrative by saving the planet. One of its long-term goals is to power 35,000 businesses and homes

Lumos Nigeria, a subsidiary of Lumos Global, is an off-grid solar service provider, incorporated in 2013 with the aim of providing reliable, clean and affordable electricity in Nigeria. Through a strategic partnership with MTN, a multinational mobile telecommunications company, Lumos has installed over 100,000 solar systems in homes around Nigeria.

It has received several funding from international investment firms and the Federal Government of Nigeria. The Federal Government of Nigeria, jointly funded through its Rural Electrification Agency (REA) and the Nigeria Electrification Project (NEP) by the World Bank, awarded a share of the $75Million grant to electrify over a million households by 2025.

« BP in Transition: An Open Letter to BP Shareholders
In Search of a Rainmaker: the case of Shell »