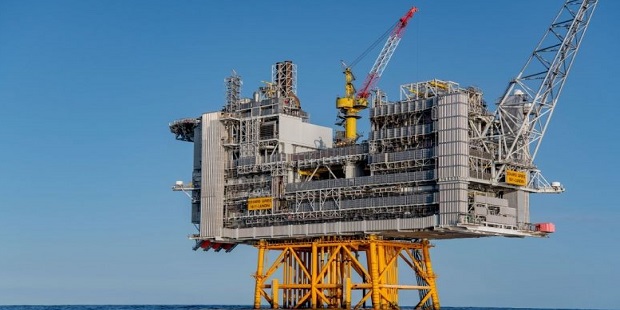 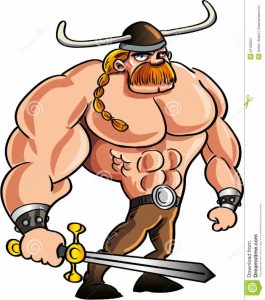 es its warring ways like that of historic times. Not with the sword but with the strength of Norway’s abundant oil, natural gas, hydro-electrical power and offshore wind energy. The country’s bounteous natural resources coupled with a small population of only 5.5Million people has resulted in Norway being anointed with one of the highest per capita incomes in the world.

Norway is Europe’s second-largest oil and gas producer behind Russia.  It is playing a major role in helping the European Union shift away from reliance on Russian fuel after Moscow’s invasion of Ukraine.

The Norwegian state’s participating interest is split in two parts. The first is linked to Equinor, the state hydrocarbon firm. The second is linked to the state’s direct financial interest (SDFI) in the petroleum industry. The SDFI system is a fund into which the surplus wealth produced by Norwegian petroleum income is deposited.

The purpose of the fund is to invest parts of the large surplus generated by the Norwegian petroleum sector, mainly from taxes of companies but also payment for licenses to explore for oil as well as the state’s direct financial interest and dividends from Equinor which is 67% owned by the state. The fund now has started dumping its shares in oil and gas companies and instead prescribing renewables to ensure it’s on the right side of history.

Yet the term ‘green’ has, since the Russian-Ukraine conflict, been given a serious re-think. Natural gas is now considered relatively green. Norway is, of course, more than happy to ensure that Norwegian natural gas can be substituted for Russian gas and thus ensure that Norway’s sovereign wealth fund continues to grow and Equinor in turn, has the funding required to ensure its future green growth.

The Greening of Natural Gas

While Norway can continue its green journey, the legitimacy of greening natural gas has ramifications far beyond the Norwegian Treasury. Christian Ng, Research & Stakeholder Engagement Leader, Debt Markets, described in a recent IEEFA (Institute for Energy Economics and Financial Analysis) how green has achieved a green status.

The key question according to Ng is “how do we ensure that green-branded businesses and products are true to label and deserving of green energy finance?”[1] According to her, green taxonomies play an important role.

“A taxonomy is a system for categorizing things based on their scientific characteristics. A green taxonomy specifies business activities that are low-emitting and environmentally sustainable, and therefore eligible for green finance. In the energy space, this typically refers to renewables like solar, wind and geothermal. It also specifies the environmental criteria, such as emissions thresholds, that the activity must satisfy to qualify for the green label.”

For banks and investors, Ms. Ng continues, “a taxonomy provides the parameters for what they can and should invest in if they want to call it a green investment. Wanting certainty that they are investing in clean and sustainable technologies; they rely on taxonomies to guide them.

“Therefore, a key role of green taxonomies is to efficiently channel and unlock new pools of capital towards proven, environmentally clean and sustainable assets, to address the global climate crisis.”

Ng argues that both Europe and China have developed a common ground taxonomy: a comparison exercise of their respective taxonomies to identify commonalities and differences. The European and Chinese approach is a counter measure to taxonomies tailored to national or regional contexts which in terms of methodology, metrics and technical criteria can differ significantly from market to market, leading to comparability issues for capital providers.

Within this debate natural gas has become a key issue.   According to Ng in October 2021 the South Korean government added LNG to its near-final green taxonomy. Likewise, in November 2021 the European Commission signaled that the EU is considering a role for natural gas as part of its green taxonomy.  Other Asian markets have indicated similar intensions meaning gas or LNG would qualify for green bonds and loans under these taxonomies.

Yet China, according to Ng, has indicated that its long-term policies exclude fossil fuel electricity projects, sending the right signals to the market.  The precedent was set in 2015. Then China’s first green taxonomy categorized “clean coal” as a green project that qualified for the issuance of green bonds, drawing widespread criticism. No doubt the 2015 incident sent China a signal to take green more seriously.

In the short-term China has chosen natural gas as the fuel of choice. In 2020 China created PipeChina, an overarching national gas pipeline company to rationalize and distribute natural gas on a country-wide basis. PipeChina is the most visible sign that China sees natural gas in the short term as a fuel of choice if it is to achieve its goal of CO2 neutrality by 2060 or earlier. China has at present 22 LNG import terminals and plans to construct 24 more by 2025.

Another piece of the puzzle is international financial participation. Ng indicated that Yi Gang, the governor of the People’s Bank of China, …” stressed that government funding alone would not be sufficient for China to meet its net zero goals – forecast to require an estimated $22Trillion from 2021 to 2060 – and therefore, market participants must be encouraged to step in and fill the gap”.

In other words, multi-lateral funding will become a necessity. The Chinese approach is based on two premises:

1.) In the short-term natural gas as its fuel of choice; and

2.) In the long-term be prepared to move towards cleaner, low carbon fuels (wind and solar) in order to achieve green financing.

1.) Whether natural gas should be seen as sustainable, and

2.) If gas has a role in decarbonizing the economy, should it be seen as a green investment?

Ng concludes: “If gas-fired power is recognized as green, Environmental, Social and Governance (ESG)-focused investors may find themselves inadvertently backing the high methane and carbon fuel and risk being accused of greenwashing. This in turn risks undermining investors’ trust and the purpose of green taxonomies.”

Two powerful groups have opposed the inclusion of natural gas in any taxonomy system:

1.) The UN-backed Net-zero Asset Owner Alliance, which represents about EUR 9Trillion of investment; and

The Chinese can take heart and be assured that in the short-term their natural gas and LNG imports will be given a green stamp. And be further assured that they have a favorite position staked out to develop a future low-carbon world.

According to the Norwegian Petroleum Association (see below), Norway produced in 2020, 22% of Europe’s natural gas demands. Additionally, two-thirds of Norway’s total gas resources is still to be produced. No doubt in the short-term natural gas exports from Norway to Europe will be substantially raised. 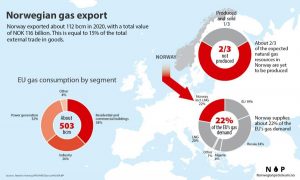 A very recent example of Norway’s importance to the UK is that Equinor and UK-based Centrica agreed for Norway to provide an additional 1billion cubic metre (bcm)/year to the UK under Equinor’s existing contract with Centrica, lifting the total volume above 10bcm annually.  Typically, Equinor exports up to 22bcm /year of natural gas to the UK which covers more than 25% of the UK’s gas demand.  Helge Haugane, Equinor’s senior vice president, Gas & Power said that “In a period with a challenging political and macro-economic environment with strong demand for natural gas, we at Equinor are doing what we can to export as much gas as possible to the market”.

The greening of natural gas will help strengthen Equinor’s twin pillars of natural gas and its growing offshore wind portfolio. Will this provide Equinor the financial depth and ability to achieve maximum leverage for both pillars?

Equinor’s offshore wind portfolio is pledged to grow to 12–16 GW of installed capacity by 2030. Renewables will receive more than 50% of capital investments by 2030. Yet there is severe competition from a number of key European new energy players.

Equinor has chosen a series of joint ventures to develop its offshore wind portfolio. The first, Dogger Bank, heralded to become the world’s largest offshore wind farm, is being developed together with SSE Renewables based in the UK. Located in the North Sea, the project will produce some 3.6 GW of energy, enough to power 6Million households. More recently, Eni has purchased a 20% stake in the Dogger Bank A & B Project.

The second is Equinor’s Empire Wind and Beacon Wind assets off the USA’s east coast. In September 2020 it was announced that BP was buying a 50% non-operating share, a basis for furthering a strategic relationship. The two projects will generate 4.4 GW of energy.

No doubt the Equinor share price is enjoying the message being sent out: that the company will be spending more than one-half of its capital spending on low carbon energy by 2030 to become a leader in offshore wind technology. While the investor community may see the low carbon strategy as a clear incentive, the obvious benefit is the simple clarity of the message.

Whether a company is an oil company or an energy company seems less important. That is why aside from Equinor, Chevron, which is on track to make 2022 the 35th consecutive year with an increase in annual dividend payout per share, has maintained its value. Of the oil majors—BP, ENI, ExxonMobil, Equinor, Shell, Repsol, and TOTALEnergies— have been industry laggards between 2018 and 2022 whereas Chevron and especially Equinor stand out very positively.

The question remains whether Equinor can continue to maintain its twin portfolio—offshore wind and natural gas—under one roof. For sure, Europe will require much more Norwegian natural gas in the near future. Will the additional funding from European gas revenues be enough to provide its offshore wind division the necessary economies-of-scale to compete with Europe’s new energy companies? Will Equinor’s offshore wind energy division be spun off to create yet more shareholder value? If so then our modern Vikings could open a second economic front in the ongoing battle of the energy transition.

Gerard Kreeft, BA (Calvin University, Grand Rapids, USA) and MA (Carleton University, Ottawa, Canada), Energy Transition Adviser, was founder and owner of EnergyWise.  He has managed and implemented energy conferences, seminars and university master classes in Alaska, Angola, Brazil, Canada, India, Libya, Kazakhstan, Russia and throughout Europe.  Kreeft has Dutch and Canadian citizenship and resides in the Netherlands.  He writes on a regular basis for Africa Oil + Gas Report, and contributes to IEEFA (Institute for Energy Economics and Financial Analysis). His book The 10 Commandments of the Energy Transition is being published this June.