Egypt Signs a Gas Agreement With the EU 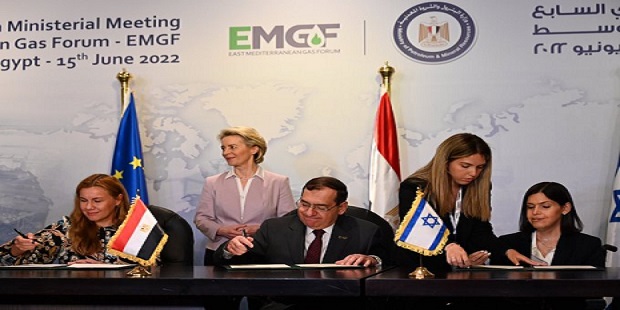 Egypt, Israel and the European Union (EU) have signed a Memorandum of Understanding (MoU) to increase LNG exports across the Mediterranean.

The agreement calls for Israel to pump more gas via a pipeline to Egypt’s two LNG facilities before exporting it on tanker vessels across the Mediterranean to Europe. It wasn’t clear how much gas Egypt will be exporting to the continent.

Europe is pivoting away from Russian gas import, as that country shells Ukraine with massive artillery fire, in what Europe considers an unprovoked invasion.

“With this   agreement we will work on the stable delivery of natural gas to the EU from the East Med region”, tweeted von der Leyen after the signing ceremony. “This will contribute to our energy security. And we are building infrastructure fit for renewables – the energy of the future”.

The signing took place on the sidelines of a meeting of the East Mediterranean Gas Forum (EMGF), which brings together officials from the eight founding countries, as well as observers the EU, the US and the World Bank.

Egypt has had a singular, intentional focus on being the Mediterranean regional hub for energy supply and demand. The EMGF has been a key foreign policy initiative of Cairo — where the forum is headquartered — that would see us be the LNG export hub for the region’s gas reserves. Apart from Israel, Egypt has agreements with Cyprus and Greece on pipelines that would see their gas sent to our facilities for re-export

Two days before the EU/Egypt/Israel agreement, Gazprom, the Russian state-owned gas behemoth— which provides around 40% of Europe’s consumption — reduced supplies through the major Nord Stream 1 pipeline by 40%, blaming Siemens (the German engineering contractor) for malfunctions at its Baltic station. Russia had already cut off gas supplies to the Netherlands, Denmark, Poland and Bulgaria for failing to pay in Russian currency, The Rubble.