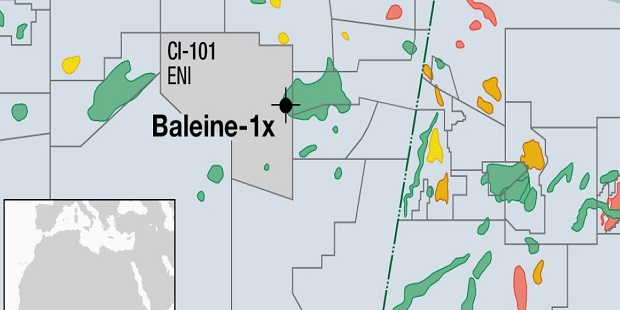 A new discovery offshore Cote d’Ivoire has sharply increased ENI’s oil and gas volumes in place to 2.5Billion Barrels of oil and 3.3Trillion cubic feet (TCF) of associated gas, the company has reported.

Baleine East 1X well, the second find on the Baleine structure, “confirmed the presence of a continuous oil column of about 48metres in reservoir rocks with good properties”, the Italian explorer says in a release. “From the vertical borehole a horizontal drain of 850 metres in length was subsequently drilled into the reservoir to perform a production test that confirmed a potential of potential of at least 12,000barrels of oil per day (12,000BOPD )and 14Million standard cubic feet per day (12 MMscf/d) of associated gas of production”.

The Baleine-1, located in block CI-101 in Côte d’Ivoire, was announced a discovery in September 2021. ENI took an early decision to develop the field and deliver first oil by 2023. Baleine East 1X is located in a water depth of about 1,150 metres, and five kilometres km east of the Baleine 1X, in an adjacent block CI-802. The result has simply extended the Baleine field eastwards.

ENI operates the two blocks with 90% operatorship. The state hydrocarbon company Petroci is a 10% partner.  ENI holds interests in five other blocks in the country’s deepwater, including CI-205, CI-501, CI-504, CI-401 and CI-801, all with the same partner Petroci Holding.

ENI says that its ongoing Baleine Field drilling campaign will continue with the spud of “a third well which will ensure, together with the other two already drilled, the accelerated start-up of production, confirming first oil in the first half of 2023”.

Baleine East 1X well was drilled with the Saipem 12000 drillship. The well reached its final depth of 3,165 metres measured depth.