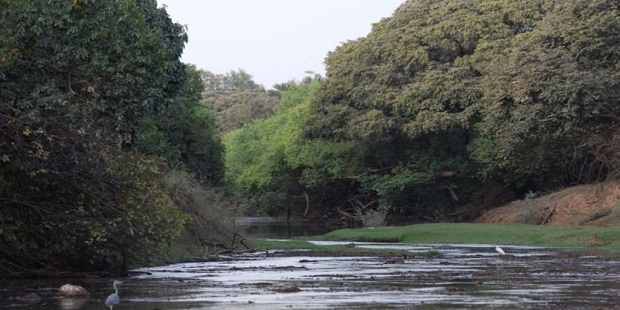 BLAST FROM THE PAST

The speedboat sped through the broad crumpled surface of water, making ripples of foamy liquids as we raced past civilisation. We were leaving the hive of activity at the Escravos jetty, a busy “river car park” filled with large and small boats anchored on concrete pavements, situated a short distance away from the oil terminal and tank farm owned by Chevron, an oil producing company.

A bank of clouds was building on the horizon. The water body seemed to be filled to the brim. Time and again I had the distinct feeling that our boat was floating involuntarily, jerking forward and backward; we were traversing a mountainous body of fluid, dancing on it, bumping into invisible potholes as we hurried along.

Our destination was GBOKODA, another riverine settlement off the main course of the Benin River, the main water way running the length of Delta State.

Fate was playing some prank. The first and last time I ever made a long journey on water, I was going from IGBOKODA, a riverine enclave in Ondo State, to AIYETORO.

My mission was to report on the crumbling of that miniature socialist community on the shores of the Atlantic. That was in the Easter of 1985.

I was a full-time journalist then, working for the Guardian of Lagos.

The present journey took place in the Easter of 1990, five years later. I had made the transition into full time petroleum geoscientist, working for Chevron Nigeria.

This trip was an experience broadening trip, my superiors called it, to understand how field geophysicists gathered the seismic data that I and other ‘interpreters’ used in the office to generate reservoir maps.

An inner voice told me that for me, Igbokoda, had a relationship deeper than similarity of names, to Gbokoda, an Itsekiri Village where I was heading exactly five years later. Both settlements thrive on sea food, their people’s lives are anchored on the tide and waves. Each of them speaks a rhythmic dialect that is a branch off the mainstream Yoruba language.

My mind moved away from sociology to the scenery. I took in the hedgerows of green trees that defined the width of the waterway. They were far apart on both sides of the corridor and seemed to converge in the far distance, where they attempted to meet the sky. We passed a wooden jetty, populated by a gathering of villagers. 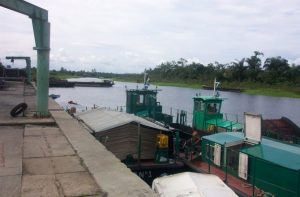 A distinguished village chief, attired in formal traditional wear, waved to us as if our boat was his private property. I waved back in jest. At another gangplank up river, one young woman dipped a basket-like net into the water, hoping to catch a stray fish. She failed, and waved to us when she noticed that I was intensely staring at her.

Time and again, the boat driver would reduce the speed for an upcoming canoe, whose driver would have to roll quickly in order that his vehicle was not capsized by the massive ripples churned up by the engine. But then the desperation on the face of the canoe driver depended on the condition of his canoe. Some of the canoe drivers we passed by were calm, seeming to have more fun running their canoe out of danger than we had manipulating our speed boat for the entire stretch of the journey. “Well maintained” canoes did not have to worry much about up-coming speed boats”, our speed boat driver told me, especially in the open river. These people are masters of water. They know the route better.”

Presently, the front rows of trees gave way to a cluster of raffia huts. In front of one, a group of five boys tackled themselves in a game of football, kicking up more sand and marsh than they succeed in kicking the round leather object.

In every Village along our route, inhabitants surveyed our boats with some interest as if it reminded them of one belonging to a distant cousin. They broke into smiles and greeted us. In one village, one naked girl standing with her mother looked so enthusiastic; she waved the cup with which she was bathing at us.

Soon we branched off the main “highway” into a darker cavernous route where the trees seemed to close in on us. The water was calmer, greener, and in places, very muddy. The roots of the trees were almost as dark as soot. Most of the trees, even though they formed broad canopies, stood like gangling footballers frozen at some stage of motion.

Two tall trees standing like pillars, faced us at a fixed spot. They looked like some transfixed characters out of D.O Fagunwa’s A Forest of Thousand Demons.

The boatman deftly manoeuvred our vehicle in these narrow creeks, steering it out of harm’s way, just when I was afraid we were going to bump into some tangled undergrowth in the mangrove. Each time he did so, we entered a curved exit out of the narrow creek, and entered another narrow creek.

Nature was at peace here. There were no birds chirping close by. No sound of crickets. But I saw a villager in the shade of trees sleeping off in his canoe and an old woman busy fixing her fishing net.

People’s homes emerged out of stilts. Sights of family cooking in the canoe were common.

We emerged from the serene setting of the narrow rivulet and hit the broad open river again. The sun glared harshly, but the breeze tempered the heat.

Suddenly an outcrop emerged from of the river, stretching out for a few hundred meters. It merged into mud at a junction where the main water way meets with another branching creek leading away into a location of an oil rig belonging to Shell Petroleum Development Company of Nigeria. But we did not stop. Instead, we continued along the broadway.

Down the ‘road’, some beautiful hedgerows of trees gave way to some rig location. Now I notice; each time we spot a rig location along the route, I noticed that huge masses of once verdant wood had been hacked down on the marsh. It is the environmental price we pay in exchange for oil money.

From the broadway, we veered off into another corridor, this one much wider than the narrow routes we had traversed along the journey. The water surface was almost as crumpled as in the open river. We passed by some wooden poles, on which were affixed some electric devices.

A school wheezed past. A row of house boats. Then, a community bigger than we had come across since the journey began 90 minutes earlier. Welcome to

Culled from Chevron News, published in 1990

TOYIN AKINOSHO wrote about one of his field trips on the job as a geologist in Chevron Nigeria’s exploration department.