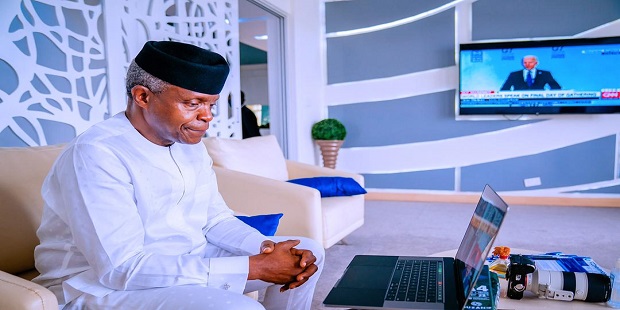 A key deliverable of Nigeria’s close to half a trillion-dollar energy transition plan, is “managing the expected long term job loss in the oil sector due to global decarbonization”.

The country has been run as a hydrocarbon economy for most of its 62 years of independence.

Through the plan, launched on August 24, 2022, the government hopes to achieve a carbon neutral economy (so-called ‘net zero’) by 2060, that is 38 years from now and a hundred years after independence.

In the course of that journey is a target for universal energy access by 2030, that is eight years’ time., the Vice President said the plan was designed to tackle energy poverty and climate change crisis, as well as deliver sustainable development goal seven (SDG7), which is: “ensure access to affordable, reliable, sustainable and modern energy for all” by 2030.

It’s a tall order. The government’s own Rural Electrification Agency (REA) estimates that nearly 50 percent of Nigerians (or about 105Million people) do not have access to grid electricity, while millions of those connected to the grid have less than 12 hours of electricity every day.

The plan envisions vibrant industries powered by low carbon technologies, streets lined with electric vehicles, and livelihoods enabled by sufficient and clean energy. And it presents a unique opportunity to deliver a true low carbon and rapid development model in Africa’s largest economy, the government said.

There’s a nod to natural gas: as Nigeria takes ownership of “the transition pathways” out of the fossil fuel era (dominated by diesel, charcoal, diesel, kerosene, firewood), “and designs climate-sensitive strategies that address peculiar growth objectives”, said Yemi Osinbajo, the country’s Vice President and the designated overseer of the road map. “the plan recognises the role of natural gas in the short term to facilitate the establishment of this low energy capacity and address the nation’s clean cooking deficit in the form of LPG”.

Osinbajo said the transition plan requires a significant scale of resources which includes $410Billion above business as usual spending to deliver a transition plan by 2060 which translates to about $10 Billion per year. At the launch, the World Bank and the US Export-Import Bank (EximBank) pledged a sum of $3Billion to boost the implementation of the plan.

The plan envisages a lifting of 100Million people out of poverty, reducing Nigeria’s carbon footprint, drive economic growth and create jobs.  “The plan has the potential to create about 340,000 jobs by 2030 and 840,000 jobs by 2060”.