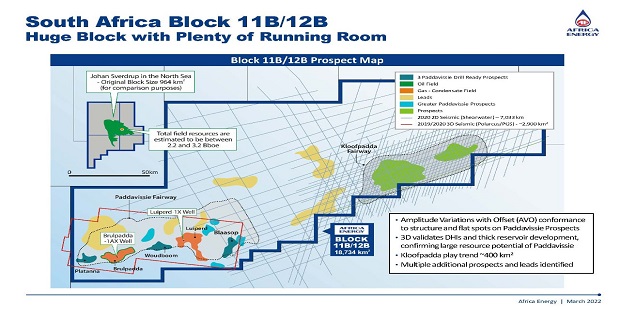 TOTALEnergies expects to sign a head of agreement with Petroleum Agency South Africa (PASA) in late August and apply for production licence for its Brulpadda -Liuperd gas project by September 2022, but the likelihood that the project will have a smooth ride to delivery in 2025 is far from certain.

The Brulpadda -Liuperd gas and condensate reserves are located in Block 11B/12B in the deepwater Outeniqua Basin, 175km offshore off the coast of the Western Cape; just the right place and context that the country’s passionate, well-funded, environmental activists will likely choose to hold it up.

The plan is to pump the gas to the 200Million standard cubic feet per day (200MMscf/d) Gas To Liquids Plant operated by state hydrocarbon firm PetroSA at Mossel Bay also in the Western Cape.

TOTALEnergies application for production licence “is almost certainly something which will be subjected to legal opposition from climate justice groups and nongovernmental organisations opposed to the development of the gas reserves”, reports EWN.co.za, a South African online newspaper.

“The barrage of legal cases against fossil fuel projects is a significant concern for the Central Energy Fund CEF, the state energy parastatal”, EWN reports, quoting Ayanda Noah CEF’s Chief Executive who is looking forward to working with TOTALEnergies on the project. “There is litigation just from all angles. In fact, I think all our oil and gas projects – there’s litigation on all of them, which is a challenge,” she says

TOTALEnergies estimates around 3.4Trillion cubic feet and 200Million barrels of condensates of recoverable reserves in the two fields.

Ayanda Noah told Fin24 in an exclusive interview. “The plant needs to be upgraded. That work will have to be done, and I believe it will take about 12 to 18 months. The gas is coming in about 2024 to 2025 – so it’s literally around the corner.

But just a week ago, Barbara Creecy, the South African Minister of Forestry Fisheries and the Environment shot down a second appeal by the Turkish Karpowership group for ship-mounted gas-fired power plants at harbours in Richards Bay, Ngqura and Saldanha Bay, saying that the country’s desperate need for power should not come at the expense of the Constitution or the environment, and subsequently human beings.

TOTALEnergies has been, indeed, an exception to the rule. Last February the Western Cape high court ruled, in favour of fishing communities on the West Coast, against Searcher Seismic’s proposed multiclient survey, planned to acquire  10,000 sq km of three dimensional (3D) and around 22,014 km of 2D seismic data, over a number of blocks in the west and southwest coasts of South Africa, covering the Outeniqua Basin and its sub-basins, including Bredasdorp, Infanta, Pletmos, Gamtoos, Algoa and Southern Outeniqua Basins.

That ruling came about 40 days after Shell lost its bid to appeal an interdict granted to Wild Coast small-scale fisher communities opposed to its 3D seismic survey. The Australia-based Seismic Searcher decided to discontinue pursuing the case and announced the immediate demobilization of its survey vessel, the BGP Pioneer.

ENI has also had challenges with activists against its plans to explore off the Kwazulu Natal, right in the Indian Ocean.

« Genser Secures >$400Million for Gas Pipeline and Processing Projects in Ghana
ENI will Start Small with Tango FLNG, Then Add a Bigger Floater »