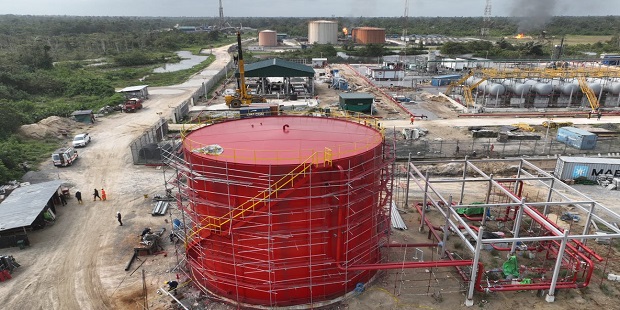 Completion of the first of a two well campaign has pushed production in Otakikpo field, onshore eastern Nigeria, to slightly above 7,000Barrels of Oil Per Day, Africa Oil+Gas Report has learned.

The field was delivering around 4,000BOPD prior to the campaign, according to the top management of Green Energy International Limited (GEIL), operator of the asset.

“We flowed much more than the 3,000BOPD when we tested the well (Otakikpo-4)”, says Anthony Adegbulugbe, a professor of Energy Management who is the company’s chairman and chief executive officer. “We decided to choke it back (to a lower output) to conserve the energy”, he explains. “Another well is coming that will take us to 10,000BOPD”, the CEO says, referring to Otakikpo 5, the second well in the campaign which is currently drilling.

A 3,000BOPD jump in output from one well in a marginal field is quite exceptional in the onshore Niger Delta in the year 2022, going by the downward trend in production in the region all round.

Two other drilling campaigns on similar fields, carried out elsewhere in the Niger Delta in the last six months, have not been this successful, although those fields have longer production histories than Otakikpo.

Nigeria’s crude oil production slumped from 1.4Million barrels per day in January 2022 to 1.08MMBOPD in July 2022, according to data provided by the Nigerian Upstream Petroleum Regulatory Commission. The numbers are still looking for the floor.

Otakikpo field reached 6,000BOPD, at inauguration in the first quarter of 2017 and has slowly declined in the last five and half years. The ongoing campaign is part of a planned phased development which could take the field to 20,000BOPD. But the existing infrastructure can only accommodate 10,000BOPD

As part of Africa Oil+Gas Report’s C-SUITE Interview series, Professor Adegbulugbe fielded a range of questions on GEIL’s journey as an oil and gas producer, highlighting the phased development of Otakikpo field, the company’s host community engagement, and the plans to be an integrated energy provider with a gas processing plant, a crude oil refining facility, an expanded terminal, and other features of an industrial hub. AOGR will be running the full story on both this online newsletter platform and the monthly e-edition of the report.-Editor.