Drilling of high-impact oil and gas prospects is set to rebound this year after a disappointing 2021, when success rates plunged towards record lows, Rystad Energy research shows. These critical wells have found hydrocarbons 47% of the time so far this year, up from a measly 28% for 2021. With more than four months still to go in 2022, discovered volumes from high-impact wells have nearly quadrupled to over 1.7 billion barrels of oil equivalent (boe) – a positive sign for global hydrocarbon supply.

A total of 33 high-impact wells are set to be drilled this year, the largest annual number since Rystad Energy started tracking the sector in 2015. This is only slightly more than last year’s 29 high-impact probes, which only yielded 450 million boe because of the low success rate.

Rystad Energy classifies high-impact wells through a combination of factors, including the size of the prospect, whether they would unlock new hydrocarbon resources in frontier areas or emerging basins, and their significance to the operator.

Bucking recent trends, discovered liquids have accounted for 1.2 billion boe or almost 70% of the volumes this year, while gas discoveries total about 550 million boe. In previous years, gas discoveries have vastly outnumbered liquids volumes. This year’s reversal is mainly due to two significant oil offshore discoveries in Namibia – TotalEnergies’ Venus and Shell’s Graff.

“Last year was disappointing for discovering gas and liquid volumes from high-impact wells, but 2022 is on track to make up for that slump. If the success rate seen in the first half of 2022 holds for the full year, we could be in for one of the most productive annual volumes total on record,” says Rystad Energy senior analyst Taiyab Zain Shariff. 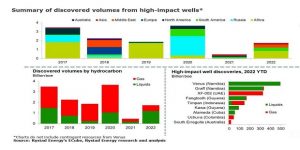 Of the 33 expected high-impact wells this year, 19 have already been completed, four are in progress, and 10 are scheduled to be completed before next year. More than half of the wells drilled so far in 2022 are considered a “focus for the company,” indicating that more operators are narrowing their geographical range of exploration and focusing on core regions instead of frontier areas.

The global oil majors and other exploration and production companies account for more than 60% of the high-impact wells completed this year. Majors have drilled eight high-impact wells, of which four resulted in commercial discoveries: TotalEnergies’ Venus and Shell’s Graff oil discoveries in Namibia, ExxonMobil’s Fangtooth oil find in Guyana, and Eni’s XG-002 gas discovery in the UAE.

More than 45% of wells completed so far in 2022 are in South America and Africa, followed by Australia and Europe with 16% each of completed wells. By individual country, Australia accounted for the most completed high-impact wells with three, followed by Guyana and Namibia with two wells each.

Of the 19 high-impact wells completed this year, 47% resulted in a commercial discovery, with the rest either dry or uncommercial and one still awaiting results. Only one find was a pure oil discovery, while the rest were either gas or liquids with associated gas. This year’s success rate is almost equivalent to 2020, which was one of the most successful years in volumes from high-impact wells.

We expect 14 high-impact wells to be completed or spudded for the rest of this year, six of them by majors. Eni operates two of the four high-impact wells currently being drilled. The first is the Cronos-1 well in Block 6 off Cyprus, which is drilled at a water depth of around 2,350 meters targeting a Cretaceous play. The other is the Dan Tranh-1X well in Block 115/09 off Indonesia, targeting a newly identified Miocene play in the emerging Song Hong Basin. The other two in-progress wells are the much-awaited, play-opening Rencong well operated by Repsol in the Andaman-III block off Indonesia, and Shell’s Jaca-1 well in Block 6 in the frontier Rio Muni basin of Sao Tome & Principe. That well reached its total depth last week and is undergoing completion and evaluation.

The rest of the wells planned for this year are distributed throughout Africa and the Americas, with some exciting wildcats to watch in Southeast Asia as well. Most of these are classified “focus for the company,” followed by wells in frontier basins. The frontier wildcats will be interesting to watch as they may open entirely new petroleum regions. These include Kuwait’s first offshore probe in 32 years, where Halliburton has a contract to drill six high-pressure, high-temperature (HP/HT) exploration wells for state-owned Kuwait Petroleum Corporation. If successful, this campaign could help restart Kuwait’s offshore legacy fields after a long hiatus.

For more analysis, insights and reports, clients and non-clients can apply for access to Rystad Energy’s Free Solutions and get a taste of our data and analytics universe.