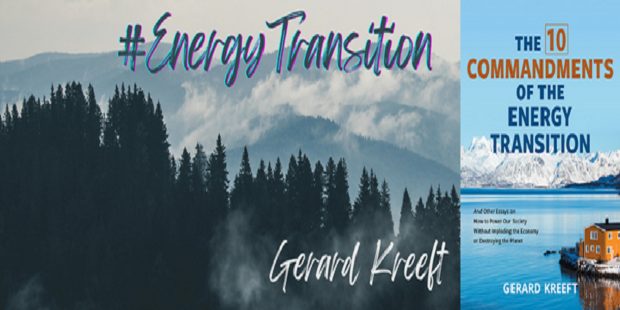 Where does one begin to achieve global net zero by 2050 through energy transition?

A proposition of biblical proportions involving not the twelve tribes of Israel but the one hundred and eighty-four nation states of our planet.

Gerard Kreeft suggests that you start with “The Ten Commandments of Energy Transition.”

He takes us through his proposed commandments and applies them to a series of essays based upon his values and areas of expertise.

There is repetition and at times his eloquent literary prose collapses into bullet point lists that would be more at home in a presentation. However, he raises issues that must be addressed in the board rooms and cabinet offices of the world.

His values are clearly hard working, frugal Christian fairness and his areas of expertise are those of the oil and gas business in Canada, Europe and Africa.

He analyzes and challenges the major oil companies, who fail to see that their one-hundred-year-old value proposition no longer works. He also questions the fairness of big oil in their attitudes to Africa and the future of Calgary. He opens the Pandora’s box of energy transition.

Gerard is clearly an out of the box thinker and his book is a thought-provoking collection of observations worthy of study to all of those facing the challenge of net zero through energy transition by 2050. Gerard suggests that without radical change that hope no longer remains in the box.

Ken Seymour, of England registered Seymour Oilfield Solutions www.seymouroilfieldsolutions.com, is an experienced engineer with a proven track record in the oil & energy industry. Skilled in Negotiation, Operations Management, and Well Engineering (Drilling). Strong engineering professional with a MBA focused on Information Technology from University of Aberdeen and a PhD in Rock Mechanics from the University of Leeds.

« With Lekela in the Bag, Infinity Transits  to the Summit of Africa’s Renewable Sector
Can Wael Sewan Transform Shell into an Energy Company? »