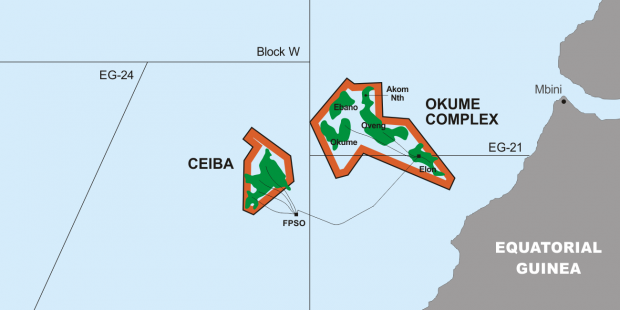 The Oslo-based minnow already has an interest in a producing asset in the country, operated by Trident Energy.

Block S covers a surface area of 1,245 km2 with water depths ranging from 450 metres to 1,500 metres and is covered by high-quality 3D seismic. The block surrounds the producing Ceiba Field and is adjacent to the producing Okume Complex, which is operated by Trident Energy and where Panoro holds a 14.25%percent non operated participating interest which accounted for 4,714Barrels of Oil Per Day (BOPD) net working interest production for Panoro during the first half of the year, around 60% of Panoro’s total output.

“Past exploration activities on Block S have tested and proven the necessary geological play elements which have led to an extensive prospect inventory being identified within tie-back distance to the Ceiba Field and Okume Complex facilities”, Panoro explains in a release. “One exploration well is planned to be drilled during 2024.  Panoro’s farm-in is subject to customary approvals”.

John Hamilton, CEO of Panoro, says that Block S will significantly expand the company’s acreage position offshore Equatorial Guinea, “and our exposure to near field exploration potential. The block is in the immediate vicinity of our producing Ceiba Field and Okume Complex which have to date produced around 465Million barrels of oil, and where we are also partnered with Kosmos Energy, Trident Energy, and GEPetrol”.

With the new acquisition, Hamilton explains, “Panoro will have modest financial exposure to a large inventory of prospects and leads within tie-back distance of existing production facilities, offering scope to leverage synergies in the event of a commercial discovery”.

Following the recent extension of the Ceiba Field and Okume Complex PSC to end 2040, he says Panoro looks forward “to working with our aligned partners and stakeholders to unlock the full potential of our enlarged asset base in Equatorial Guinea.”

« ENI Grabs More Assets in Algeria, as bp Eases Out
The Facts, The Figures: Why NNPC’s Divestment is the Place to Go »