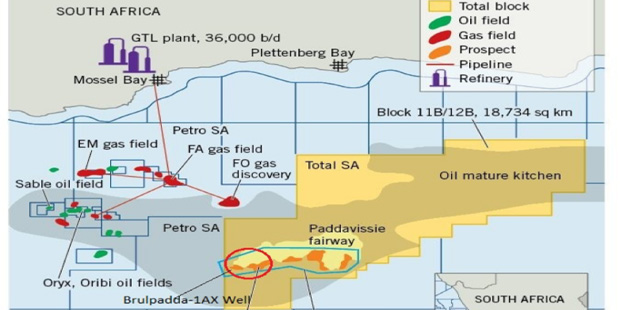 Netherlands based The Bloom association for the protection of the oceans and the South African non-governmental organization (NGO), The Green Connection, have launched an international petition against the development of a major gas project by TOTALEnergies off South Africa.

The target is the Brulpadda-Liuperd project, which is primarily intended to supply 200Million standard cubic feet per day (200MMscf/d) to a Gas to Liquids (GTL) Plant operated by the state hydrocarbon firm PetroSA, in Mossel Bay in the Western Cape.

The gas and condensate reserves are located in 1,800 metres of water in Block 11B/12B in the deepwater Outeniqua Basin, 175km offshore off the coast of the Western Cape. It is just the right place and context for South Africa’s passionate, well-funded, activism against fossil fuels.

“They know that these are complicated waters with a risk of oil spills,” warns Swann Bommier, The Bloom’s Advocacy and Campaigns Officer. “It’s a spectacular place from a biodiversity point of view, which is on the migration route of whales and sperm whales. It is also a living environment for dolphins, leatherback turtles and seals”, observes Claire Nouvian, president of The Bloom.

TOTALEnergies has been luckier than most operators in South African offshore. It had felt so surreal to observers that the French major had managed to drill to two wells, almost back-to-back, in deepwater South Africa, in contrast to the successful legal challenges against other offshore Energy projects in the country.

The move by The Bloom and The Green Connection comes at a time when TOTAL, is preparing to drill appraisals of the Brulpadda and the Liuperd accumulations, which were discovered in 2019 and 2020.

TOTAL’s application for production licence for Block 11B/12B, submitted in early September 2022, includes a development plan for supply of as much as 700MMscf/d of piped gas to customers located as far as Port Elizabeth in the Eastern Cape. If approved, it will represent some substantial flow of natural gas into the South African economy, almost doubling the supply of Mozambican gas by Sasol to some South African industrial entities.

But The Bloom and The Green Connection argue that South African authorities should only decide on the Brulpadda/Liuperd production license at the end of a public inquiry scheduled for January 20, 2023.

TOTAL has always insisted that its gas project will help displace the heavy use of coal in the South African economy. But the protesters dismiss this claim out of hand.  “Gas is not a transitional energy, we must stop the greenwashing,” they say.